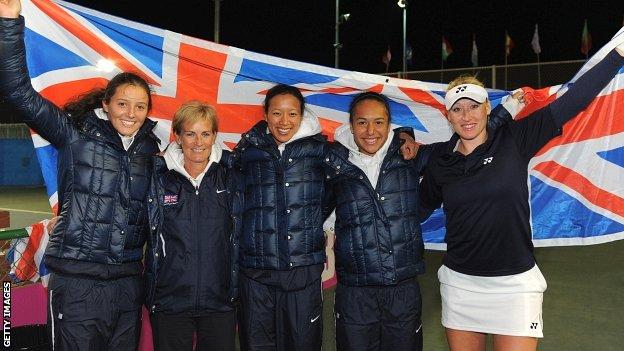 Great Britain powered through to the Fed Cup World Group II play-offs after beating Austria in their Euro/Africa Zone promotion play-off in Israel.

After wins over Portugal, Netherlands and hosts Israel saw them top Pool C, the team faced Pool A winners Austria.

Britain could face USA or Belarus in the World Group II play-offs in April.

The Americans are playing Belarus in one of four World Group II first-round matches due to finish on Sunday, with Japan facing Slovenia, France up against Slovenia and Switzerland taking on Australia.

The four winners go through to a play-off for promotion into the World Group, the four losers join Britain in a battle for a place in World Group II on April 21-22, the draw for which will take place on 14 February.

Keothavong, the world number 88, recovered from 4-2 down in the first set to force a tie-break against Mayer-Achleitner, ranked 96th, and having safely negotiated that she soon broke to lead 4-2 in the second and went on to complete victory.

At 57th in the current rankings Baltacha was nine places below Paszek but the Briton started superbly, claiming an immediate double break of serve to gain control of the match, and another break early in the second set confirmed her superiority.

Her victory ensured that doubles pairing Heather Watson and Laura Robson did not need to feature, as Judy Murray's team celebrated their fourth victory in as many days.

"Right now I'm absolutely over the moon that we've managed to win all of our matches, to win our group, and then win the play offs and get ourselves a promotion play off," said Murray, who was appointed GB coach last month.

"It is everything that I would have hoped for and I'm just so, so proud of the team after what they've achieved this week.

"Anne worked very hard today, she was a total professional and she really came through for us. You'd be hard pushed to find a better number one than Bally.

"She's just such an incredible competitor. She leaves everything out on the court so its exciting times ahead for us with the play-off match, and exciting times ahead for the future because Anne and Bally are playing the best tennis of their lives, the young players Heather and Laura are very exciting prospects and they will learn a lot from being around the older girls.

"They'll be so excited to get up to the play-offs and hopefully it will inspire them to work hard, and really help us to develop a team that can really do some damage in the Fed Cup."

Keothavong added: "Since I made my Fed Cup debut 11 years ago, this is the first time we've managed to move up and advance out of this group and I'm just so pleased for the team. It is a great feeling all round.

"This whole week has been so much fun. Heather and Laura being that little bit younger have been very entertaining, plus the support from the team has been fantastic and of course Bally has been playing extremely well so its been fantastic to be part of it all."