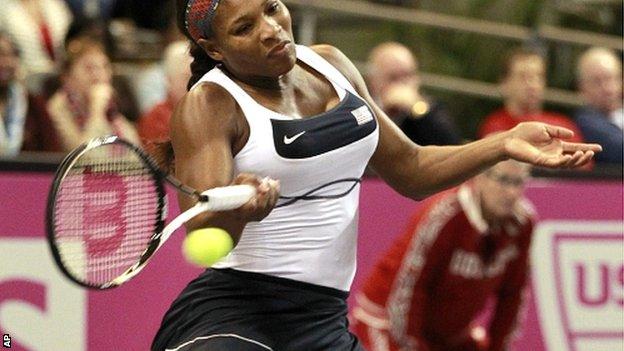 USA reached the play-offs for promotion to the Fed Cup World Group after beating Belarus 5-0 in Massachusetts.

With Azarenka still troubled by a lower back injury it was a formidable task for Yakimova, 65th in the current world rankings, against Williams, the winner of 13 Grand Slams, undefeated in eight Fed Cup matches, and still 12th in the rankings despite recent absences through injury.

But, after conceding an early break, Yakimova recovered to take a gruelling first set in 68 minutes.

After squandering seven break point opportunities in the opener, Williams took both of the chances she had in the second set, racing through it in 29 minutes.

The deciding set followed a similar pattern, Williams underlining her superiority to take it in 32 minutes to complete victory in two hours nine minutes.

"It wasn't my best day today, for sure," Williams admitted afterwards. "It's important for me to just get matches. I just need to get matches."

In the elite World Group, Serbia won the deciding doubles to beat Belgium 3-2.

Their semi-final opponents on 21-22 April will be Russia, who beat Spain 3-2.

Defending champions the Czech Republic beat Germany 4-1 and will play Italy in the other semi-final, after they won the deciding doubles to beat Ukraine 3-2.