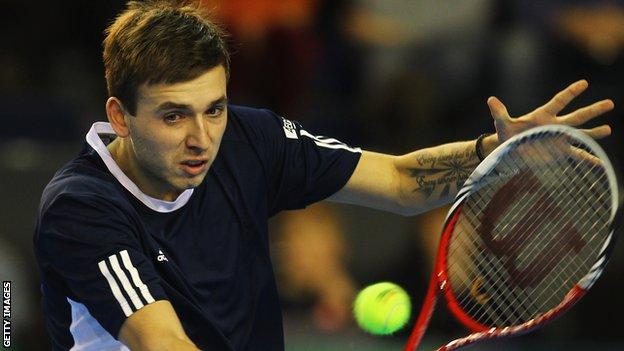 Dan Evans kept his nerve to win the deciding rubber as Great Britain beat Slovakia 3-2 in their Davis Cup tie.

I've never been on a team that's been as loud as that just behind the court and that helped a lot. Davis Cup's different, everybody unites together in situations like that

"While Dan is the hero of this tie, it's about the group," said Smith, who has been captain since July 2010. "I am so proud of the boys and backroom staff."

However, despite the victory, Smith admitted that world number four Andy Murray would be an automatic choice for the next tie should he be fit.

"We would welcome him back at any time," he laughed. "But we want selection issues for the other places."

Evans, who had not won a Davis Cup rubber before this weekend, will have done his chances of playing in the tie against Belgium, at the Braehead Arena from 6-8 April, no harm by winning both of his singles matches.

The world number 276 broke Klizan in the opening game before racing into a 5-0 first-set lead, and broke twice in the second as he took charge of the match.

However, a double-fault in game nine of the third set gave Klizan a foothold in the match and the Slovakian took advantage.

Klizan broke again in the opening game of the fourth set as the momentum of the rubber shifted and the Slovakian set up a nervy decider.

Coach Smith intervened with a pep talk for Evans. He revealed: "At the start of the fifth we said clear it, get back on the front foot and play it on your terms."

The talk worked as the Birmingham youngster broke in the third game and held on to his serve before a Klizan double-fault at match point gifted him the rubber and tie.

"Leon has to take quite a bit of credit, he kept me calm in the chair. I didn't really snap once throughout the whole weekend, which probably would have been odds-on to happen at the start," said Evans.

"I was enjoying it because it was a good match. Both players were playing good tennis and there's nothing better when everybody in the building, bar a few, is behind you.

"I'm really pleased with how the whole week went. I've never been on a team that's been as loud as that just behind the court and that helped a lot. Davis Cup's different, everybody unites together in situations like that."

Britain had led 2-1 overnight but their advantage was quickly erased by Lacko, who avenged his defeat by Evans on Friday.

The Slovakian won a tight first set on a tie-break and stepped up through the gears, breaking Ward twice in both the second and third sets, to wrap up a comfortable victory.

Austria reached the last eight for the first time in 17 years after Jurgen Melzer secured victory over Russia with a win against Alex Bogomolov.

Croatian Ivo Karlovic ended Japan's hopes in Hyogo when he beat Go Soeda in the deciding fifth rubber after Kei Nishikori had levelled the tie at 2-2 with a straight-set win over Ivan Dodig.