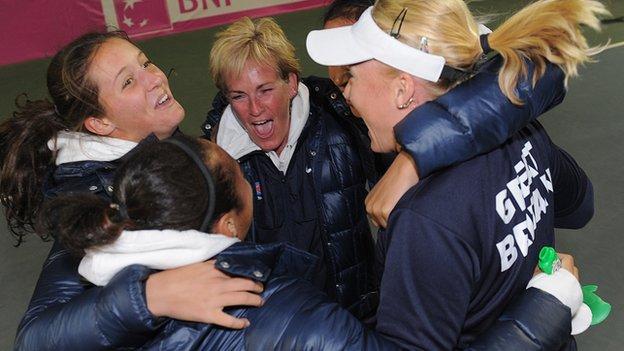 Great Britain will travel to Sweden in April's World Group II play-offs after missing out on a home draw.

Their reward is a trip to Sweden, seeded third of the four possible opponents for Britain, on 21-22 April.

The winners will earn promotion into World Group II - the second tier of the Fed Cup.

"Heather Watson and Laura Robson are very close to them in rankings as well, so we have strength in depth which is a big advantage as the play-offs are best of five rubbers over two days.

"We are looking forward to it as it's a big opportunity for GB to grab a place in World Group II."

In five previous meetings between the nations, Britain lead 3-2 overall, but Sweden have won on the last two occasions in 2007 and 2001.

For the last eight years they have competed in the gruelling Euro/Africa Zone Group I - a 15-team event played in a single location over four days with only two qualifying spots.

Victories over Portugal, Netherlands, hosts Israel and Austria in Eilat earlier this month gave Murray the perfect start to her Fed Cup captaincy.