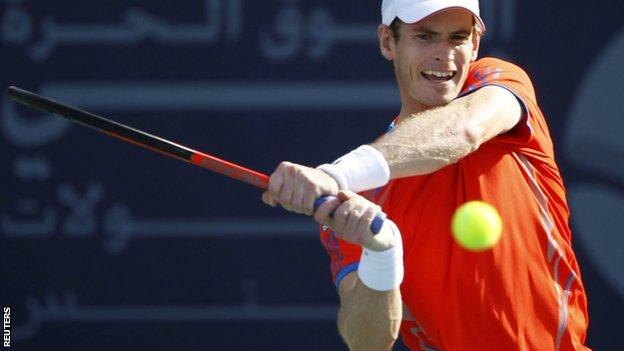 Djokovic, the defending champion, began his campaign on Monday with a 6-4 6-2 win over Germany's Cedrik-Marcel Stebe.

Roger Federer and Juan Martin Del Potro also made it through to the next round in straight sets.

"It was a frustrating match because I was up a break in the second set, and I gave it back," said Murray.

"In the third set, again I went up a break and gave the break straight back. So I could have made it a little bit easier for myself if I played a bit better."

Murray is in the same half of the draw as Djokovic, with Roger Federer also in Dubai, but Rafael Nadal is absent.

Murray looked ragged and at times his movement appeared labored in the midday heat, but he later revealed that he didn't "feel great"' at the start of the match and at times felt nauseous on court.

Berrer, a former quarter-finalist in Dubai, was match sharp after coming through qualifying.

His attacking style looked like coming up short when he fell a break down midway through the second set, but there were many more twists and turns to come, the 31-year-old from Stuttgart breaking straight back and eventually levelling after the pair had shared nine break-point opportunities.

Murray looked off the pace as the third set began, perhaps feeling the effects in his first competitive match for a month, twice failing to consolidate breaks.

Berrer was within sight of the biggest win of his career at 4-4 in the decider, but a wayward forehand gave Murray the 11th break of the match and the third seed put his serving woes behind him to close it out.

The British number one will face another qualifier, Switzerland's Marco Chiudinelli, in round two.

Second seed Federer saw off the challenge of Michael Llodra, winning 6-0, 7-6 (6) and will now face another left hander in Feliciano Lopez.

"He's somewhat similar to Llodra, so I don't have to adjust a whole lot, I don't think," said Federer. "At the same time, I know the danger of Feliciano. He's had a great season."

Fourth seed Jo-Wilfried Tsonga survived a tight match against Marcos Baghdatis, beating the 46th-ranked Cypriot 7-6 (7-2) 6-4 to set up a second-round encounter with Lukas Rosol of the Czech Republic.

"It was a tough challenge,'' said Tsonga, who won the title in Qatar last month and reached the semis last week in Marseille.

"I did not have a lot of energy. Without this energy it's difficult to play. But I was there mentally and I did it, so I'm really happy."