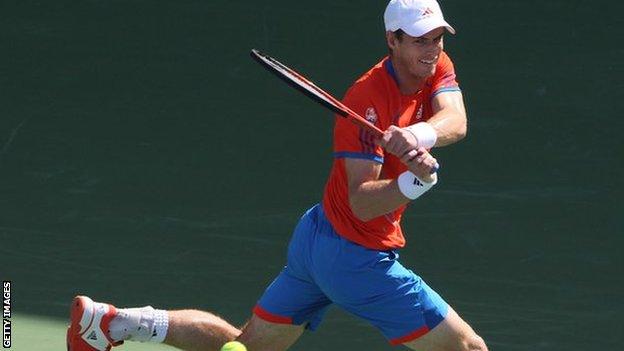 Andy Murray stepped up a gear from his first-round match to reach the Dubai Championships quarter-final by beating Swiss qualifier Marco Chiudinelli.

He will play Tomas Berdych in the quarter-finals after the fifth seed beat Lukas Lacko 6-1 6-2.

World number one Novak Djokovic progressed with a 7-6 (7-5) 6-3 win over Ukraine's Sergiy Stakhovsky.

Conditions in Miami are hotter than this. I find the conditions here almost perfect

Murray had laboured to overcome German qualifier Michael Berrer in the first round on Tuesday, his first match since

The Scot, 24, has struggled in the last two years to get over defeats in Australia, but there were encouraging signs in his routine dismissal of 30-year-old Chiudinelli.

Murray broke serve for the first time in game four with a sharp backhand to Chiudinelli's feet and saw out the set comfortably, winning over 80% of the points behind both first and second serves.

There was a slight dip in that area of his game early in the second set but he maintained the pressure on Chiudinelli's serve, going close to a break in the first and seventh games before making the decisive move at 4-4.

Forehand and backhand winners helped Murray to the break and he closed out victory with little fuss to become the first man through to the last eight.

"I played well throughout," said Murray. "I played a little bit better, so that's progress. Now I just need to keep that going."

Asked about the rising temperature in Dubai, the Briton said that training in Florida with coach Ivan Lendl had helped him in that regard.

"Conditions in Miami are hotter than this," he said. "I find the conditions here almost perfect.

"I'd been practising my serve quite a lot there and I think that went well today."

Federer remains on course to win the title for a fifth time after making short work of left-hander Lopez.

He broke the 15th seed in the final game to settle a tight opening set before breaking the Spaniard again to lead 5-3 in the second set, closing out the match with a winning volley from the net.

"It was difficult," said Federer.

"I've obviously played Feliciano many, many times way back and now on tour as well, but I've never played him when he was ranked so high and potentially so confident.

"Those are the kind of matches you need early on in a tournament to feel good about how you're handling those tough moments."

The former world number one, who now faces Mikhail Youzhny after the Russian beat out-of-form American Mardy Fish 6-2 7-6 (7-0), was beaten in the Dubai final last year by Djokovic.

"Janko's very solid from the baseline," said the Serb.

"When he has time and he steps into the court, he's very dangerous. I need to try to be aggressive.

"I need to try to stay close to the line. That's all. He doesn't have many weaknesses in his game."