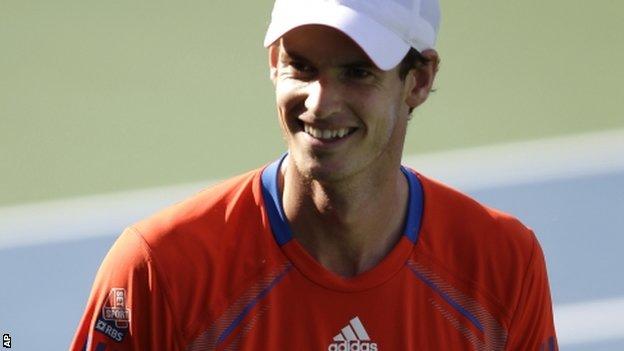 Murray, 24, came through a dramatic final game to convert his seventh match point and beat Berdych 6-3 7-5 in one hour and 51 minutes.

The Scot now faces a repeat of in the last four.

Four-time champion Roger Federer beat Mikhail Youzhny 6-3 6-4 in the other half of the draw and will now face Juan Martin del Potro.

Murray will head into the closing stages in confident mood after ending a three-match losing streak against the powerful Berdych, with the Scot's only previous win having come back in 2005.

An immediate break set third seed Murray off on the right footing, and he saw off four break points for Berdych on his way to closing out the set in 42 minutes.

The second set was an altogether less predictable contest, with Murray twice moving a break ahead in the early stages only to be pegged back straight way each time.

Berdych saved a break point with a big serve at 4-4 and was within two points of levelling the match in the following game, but it was Murray who made the crucial breakthrough with some superb scrambling to force the error at 5-5.

Murray, who by now was regularly clutching at his knee in apparent pain, looked all set to see out the match with no fuss at 40-0, but his first serve then went missing and Berdych came fighting back.

Four match points went begging before Berdych had an angry exchange with the umpire over an overrule, and the fired-up Czech escaped defeat twice more before firing a backhand long on match point number seven.

Asked afterwards about his knee, Murray said: "I had a problem with it since Brisbane and it's come and gone. It was a bit sore right before the tournament. I didn't feel it at all in the first couple of matches, and then right at the beginning of the second set I felt it.

"It's not something that stops me sort of running around. I want to try and get rid of it, because there are a lot of the big events coming up."

Murray said of Djokovic before the Serbian's victory: "I would like to get the chance to play him again. I had a great match with him in Australia, and hopefully can reverse the result.

"Any time you get a win against the number one player in the world it's important, because you don't get a chance to play them that often."

Federer has beaten Del Potro nine times in their 11 matches but one of his losses came in the 2009 US Open final.

"But tomorrow ... all the matches are different, all tournaments are different, and I'm trying to find a way to beat him again. It's really difficult for me, his game. He plays slices, drop shots, and he's one of the best in history. So I just want to be ready for a fight."