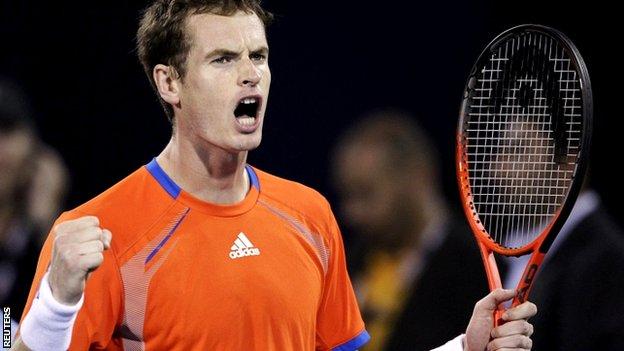 Andy Murray became the first man to beat world number one Novak Djokovic in 2012 with a straight-sets win in the semi-finals of Dubai Championships.

Murray, seeded third, broke twice in each set to come through 6-2 7-5 in one hour and 22 minutes.

The result saw the Briton avenge

"It's obviously great any time you beat the world number one," said Murray. "I just tried to do some of the same things I did in Australia.

"I was very close there against one of the greatest players ever, and today I did what I needed to - even though it nearly got away from me at the end."

Djokovic, the three-time defending champion on an 18-match winning streak in Dubai, started the match strongly and held his first two service games to love.

But Murray kept pace with the five-time Grand Slam winner before an incredible passage of play that saw the Scot reel off seven games in a row from 2-2.

The British number one was serving superbly, dropping just one point behind his first serve on his way to taking the opening set after Djokovic blazed a forehand long to give up the break in game six.

Some characteristically impressive retrieving from Murray brought more errors as Djokovic failed to find his best rhythm, and a second break in game eight wrapped up the set before the Scot raced 3-0 up in the second.

An unexpectedly regulation victory looked on the cards when Murray served for the match, but a double-fault helped Djokovic back into the contest at 5-5.

The large Serbian contingent in the crowd was now in fine voice and a full-blown comeback from the world number one seemed likely, but Murray gathered himself impressively for a final assault.

A quick-fire service game put him back in front before the under-pressure Djokovic finally succumbed, three loose errors handing over his service game for the fourth and final time.

Djokovic said afterwards that he had simply lost to the better player on the day, adding: "Generally I feel good, physically, mentally.

"It's just the start of the season. There are some 1,000 events (Indian Wells and Miami) coming up which are really important, and I need to get ready."