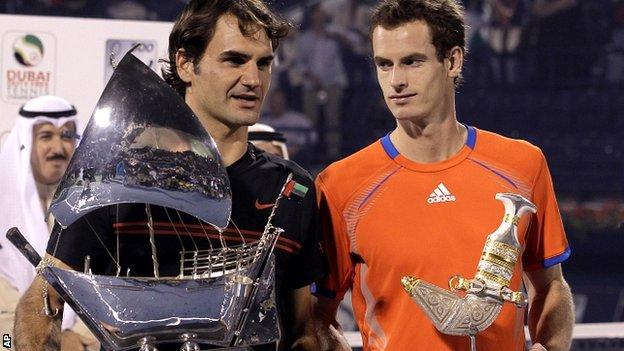 World number three Roger Federer continued his impressive run of form with victory over Andy Murray in the final of the Dubai Championships.

Federer dropped serve for the only time all week as Murray fought back in the second set, but the Swiss held firm.

"Winning is the best, it solves everything," said Federer.

After taking his winning streak to 10 matches on the back of titles in Rotterdam and now Dubai, he added: "I'm really happy, it went so well."

Federer had looked impregnable on serve all week, coming through a tight semi-final in two tie-breaks against Juan Martin del Potro on Friday after Murray's defeat of world number Novak Djokovic had grabbed the headlines.

The Briton, who had served impressively himself in defeating Djokovic, fashioned the first opportunity in the final when he earned two break points in game six.

However, a loose backhand error followed by a netted forehand under pressure saw the moment pass, and Murray would regret that fleeting opportunity when Federer made the breakthrough at 5-5.

The 24-year-old Scot fought back valiantly from 0-40 and saw Federer blaze a forehand wide on his fourth break point, but the Swiss made no mistake when presented with a fifth chance as a heavy backhand proved too much for Murray at the net.

Murray looked flat in comparison with Friday's semi-final and was not helping himself with a first-serve percentage that rarely moved above 50%, allowing Federer to attack his second serve.

That was the case when the second seed broke at 2-1 in the second set and, still to lose his serve in Dubai this year, Federer looked well set to close out the match.

It was not that straightforward in reality, with a double-fault not helping his cause before Murray sent up a winning lob to finally get the break and level at 3-3.

Murray urged himself on as he grabbed a foothold in the match but his usually reliable backhand was starting to break down too regularly, and when he clattered one into the net on break point at 4-4 he handed the advantage back to his opponent.

Federer needed two bites at the cherry but converted his second match point with a blistering forehand winner into the corner that aptly illustrated his dominance at the key moments.

Murray said: "It was a good week, I had a couple of good wins against Berdych and Novak. It was always going to be a tough battle tonight against Roger but he played the better match and deserved the win."