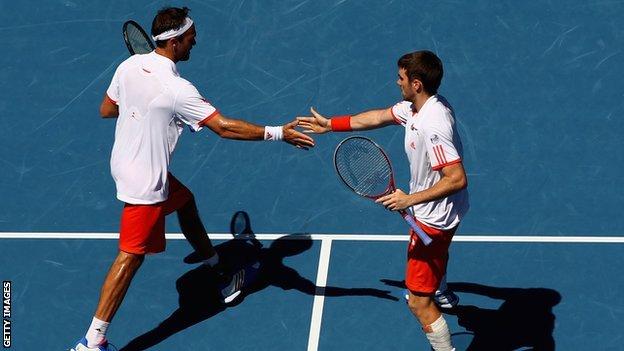 British doubles duo Colin Fleming and Ross Hutchins won their second title together as they triumphed in Florida.

But the two 27-year-olds had to do it the hard way at the Delray Beach International Tennis Championships.

Scotsman Fleming and Londoner Hutchins came from a set down to level in a tie-break before being taken the distance again in the final set.

"It was like an emotional rollercoaster really," said Fleming. "We managed to come up with big points when we needed them today."

Hutchins added: "Colin always amazingly makes these shots and he keeps saying he's lucky, but it's not, and he did that again today."

Fleming and Hutchins, son of former British Davis Cup captain Paul, won their first doubles title five months ago at the St Petersburg Open, having reached the quarter-finals at Wimbledon and the US Open.

The pair, who first played together for Great Britain in a Davis Cup tie in 2007, also saw off Mertinak - partnered by Filip Polasek - in last month's win for their country against Slovakia.