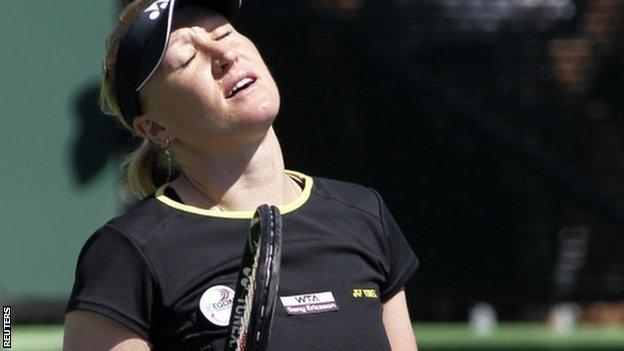 British number one Elena Baltacha found in-form Julia Goerges of Germany too strong in round two at Indian Wells.

The Scot had battled valiantly to win her opening match in three sets against Aranxta Rus, but found 14th seed Goerges a much tougher proposition.

The German broke first in game eight and twice in the second set on her way to a 6-3 6-2 victory.

British men's number one Andy Murray meets Spaniard Guillermo Garcia-Lopez in the second round on Sunday.

The Australian Open champion, who squandered a 5-1 lead in the second set, said: "I won this match mentally more than physically or tactically. That was really what brought me a win today - my fighting spirit."

Azarenka faces a third-round tie against Russian Svetlana Kuznetsova, who went through after Switzerland's Timea Bacsinszky pulled out of their match with a wrist injury.