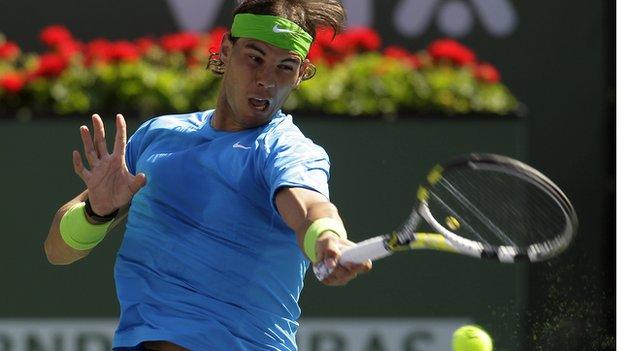 Rafael Nadal and Roger Federer made short work of their opening opponents in Indian Wells on Sunday.

Federer breezed into round three with a 6-4 6-1 win over Denis Kudla of the US.

"She started off serving really well," said 19-year-old McHale, the 32nd seed. "I couldn't get a read on her serve in the first set, and I wasn't moving very well, either.

"And then I just hung in there early in the second, and then she played one service game where she gave me a couple of loose errors, and then I just kept hanging in there. Then I got more comfortable as the match went on."

Azarenka thrashed 25th seed and former French and US Open champion Svetlana Kuznetsova 6-1 6-2 in exactly an hour, saying: "I knew she was going to be dangerous.

"She's a Grand Slam winner. I really had to step it up from my last match, and I'm glad I could perform much better than I did in that first match." 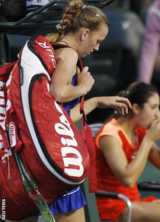 "In the beginning I was fine, I played really good," said Kvitova. "After the first set, no. I was sick in Doha and I had antibiotics, so I lost a little bit of my fitness. It was tough moving and having winners."

Fifth seed Agnieszka Radwanska overcame 27th seed Flavia Pennetta 6-4 6-2, but ninth seed Vera Zvonareva withdrew due to a viral illness that has affected both players and fans in Indian Wells.

Federer has been struggling with a flu bug and slight temperature but saw off 19-year-old Ukraine-born American Kudla in just 57 minutes.

"I'm always relieved and happy when I am able to find my way into a tournament," said Federer, who should face a tougher test against Canadian 27th seed Milos Raonic in round three. "It's a good start for me. I didn't know Kudla very much, or at all, really, so it was a good win for me."

Nadal showed no ill effects on his return to competitive action as he dominated Mayer to set up a meeting with fellow Spaniard Marcel Granollers, a 6-3 2-6 6-3 winner over Tommy Haas.

World number two Nadal, who took February off to rest his shoulder, said: "Very happy to be back in competition, that's the first thing. This is a tournament that I love. I really enjoy playing this tournament. Always in my career, I had good success here. I played very good matches.

"It's nice to be back playing at the very good level. Winning is the most important thing. It's not easy to be back after a while without competition, but I did really well. I started the match very focused, very aggressive. I'm very happy about almost everything."

In the doubles, Andy and Jamie Murray beat fellow Brits Colin Fleming and Ross Hutchins 13-11 in a match tie-break.