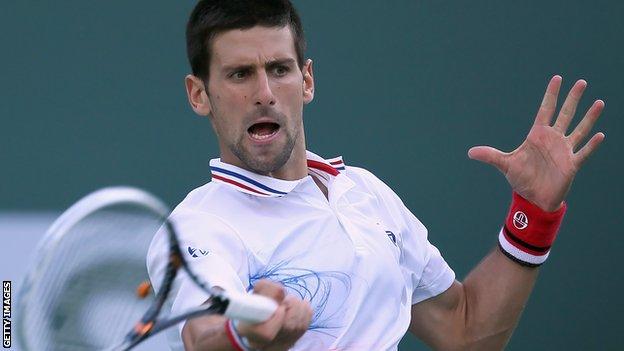 Defending champion Novak Djokovic progressed safely into the fourth round at Indian Wells with a 6-2 6-3 win over South African Kevin Anderson.

The world number one, who beat Spain's Rafael Nadal in last year's final, took both his break-point opportunities in a tight first set.

He broke once in the second to secure victory in one hour and 37 minutes.

"It was a very close match. The scoreline does not reflect how close it was," said the 24-year-old.

Djokovic is aiming for a third career title at the BNP Paribas Open.

"This is one of my most successful tournaments. I love coming back to the desert," added the Serb.

Andy Roddick's poor run against top-10 ranked players continued when he was beaten 6-3 4-6 6-2 by seventh seed Tomas Berdych. It was the American's 13th defeat in 14 games against the better players in the world.

I've known Sophia Arvidsson since I was 12 or 13 and we know each other's games so well. I'm so happy with this win

Denmark's defending champion Caroline Wozniacki came from one set down to beat Sweden's Sofia Arvidsson 3-6 7-5 6-2 and set up a fourth-round match against Ana Ivanovic, who beat Ksenia Pervak 6-7 (8-10) 6-3 6-2.

Wozniacki said: "I've known Sophia since I was 12 or 13 and we know each other's games so well.

"She just came out from a win in Memphis and I knew she was on fire. I'm so happy with this win."

Number two seed Maria Sharapova eased past Simona Halep of Romania 6-3 6-4 in their first meeting but Francesca Schiavone became the eighth player to pull out after contracting the virus illness that is sweeping the Coachella Valley.

Italian Schiavone retired after losing the first set 6-2 to Lucie Safarova of the Czech Republic.