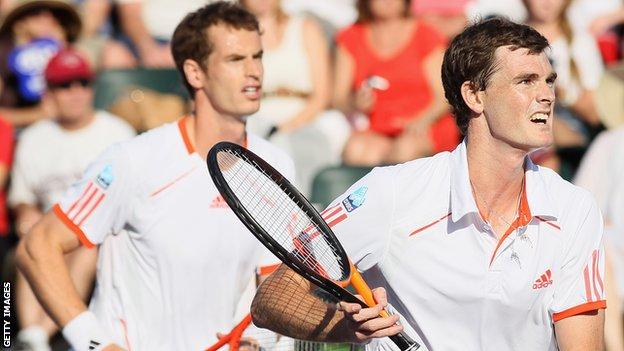 Andy and Jamie Murray were knocked out of the Indian Wells Masters doubles, as Rafael Nadal and Roger Federer won their third-round singles matches.

The British pair took the first set and led second seeds Max Mirnyi and Daniel Nestor by a break in the second, but could not build on their 2-0 lead.

I have never played him before. He has probably seen me play a whole lot on TV which helps him out a bit

"I didn't do much wrong today besides the first few games on my serve," said the Serbian. "I'm really pleased the way I was aggressive."

Wozniacki said: "I tried to fight and do my best but sometimes that is not enough."

Top seed Azarenka took little more than an hour to beat Julia Goerges 6-3 6-1 to extend her unbeaten run in 2012 to 20 matches and set up a meeting with fifth seed Agnieszka Radwanska.

"I take it day by day and after that we will see what happens," Azarenka said of her perfect start to the season. "I have to keep my focus on every moment, every day."

Sharapova was equally impressive, beating Roberta Vinci 6-2 6-1, and she will next face fellow Russian and 20th seed Maria Kirilenko.

World number three Federer came from behind to beat Raonic 6-7 (4-7) 6-2 6-4 in a much-anticipated first meeting with the 21-year-old Canadian, while Nadal crushed Marcel Granollers 6-1 6-4 in just in one hour and 25 minutes.

Federer said: "It was a difficult match. I have never played him before. He has probably seen me play a whole lot on TV which helps him out a bit."

The Swiss, who hit 10 aces and won 88% of his first-serve points over the two hours and seven minutes, added: "I hung in there and played great in the second set. The third set was close and I am glad to be moving on in this tournament."

Federer now faces Thomaz Bellucci, who also advanced when Nikolay Davydenko withdrew because of illness, eight players having already pulled out of the tournament because of a virus.