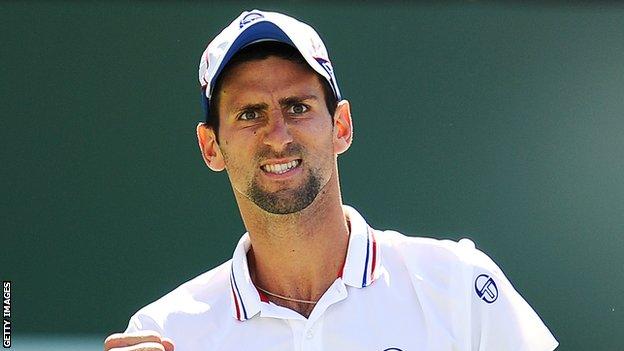 World number one Novak Djokovic kept up his excellent 2012 form, reaching the semi-finals in Indian Wells with a 6-3 6-4 win over Spaniard Nicolas Almagro.

The Serbian broke the 12th seed twice in the first set and in the ninth game of the second to win in 86 minutes.

When I woke up this morning I knew I was not in great shape. But I gave it a try on the court

Fifteenth seed Ana Ivanovic is through to the last four in the women's draw, where she will face Maria Sharapova.

In the men's, Juan Martin Del Potro plays Roger Federer and David Nalbandian is pitted against Rafael Nadal to decide the make-up of the other semi-final match.

Top seed Djokovic, who won the tournament in 2008 and 2011, said: "It was always going to be a tough match. Almagro is an established top-10 player.

"What made me very happy and satisfied with my game today was my serving."

Fellow Serbian Ivanovic, a 6-3 6-4 winner against France's Marion Bartoli, was upbeat after reaching the last four.

"I am definitely happy to be through. It was a tough match and I served well," she said. "We both started well but the eighth game of the second set was important. I just tried to stay low and make her run."

The meeting was a rematch of last year's quarter-final in which Bartoli triumphed on her way to the final - but here the seventh seed looked out of sorts.

Bartoli called for the doctor when she was trailing 2-1 in the second set and as she was having her blood pressure taken, she was caught on camera saying "everything is spinning".

"When I went on the court I was very dizzy and it was very hard for me to catch my breath," she said after the match.

Ivanovic's next opponent, Sharapova, faced a tougher route through, having to come from a set down to beat compatriot Maria Kirilenko 3-6 7-5 6-4.

Kirilenko, the 20th seed, had beaten Sharapova in their previous meeting at the 2010 Australian Open, took advantage of a slow start by the second seed to take the first set and a 2-0 lead in the second.

But Sharapova claimed that even at that point she was not concerned, saying: "I knew that I could have played better. If I felt like everything was going so well from my end and she was just playing so good, then I would have felt like, 'OK, well, she's just too good.'

"But I really felt like I could improve on so many things during the match and change things around. Little by little, I started doing those things better."