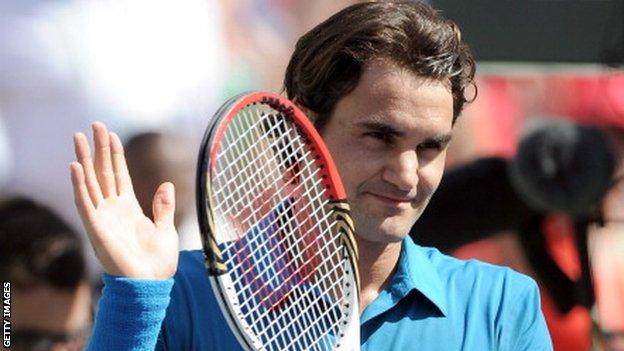 Roger Federer will play Rafael Nadal in the semi-finals at Indian Wells after they each overcame Argentine opponents in the last-eight in California.

World number one Novak Djokovic, from Serbia, meets American John Isner in the other semi-final.

Federer and Nadal have met 27 times with Nadal having won 18, including four of the last five.

But the Swiss insisted he was keen to renew their rivalry, telling bnpparibasopen.com: "He's got a great work ethic, and obviously he's one of the great players of all time.

"I have had some great matches with him all around the world."

It was clear out and the machine doesn't work. After that, I was not concentrating on the match and Roger was playing better

There was controversy on the sixth deuce when a Federer first serve was ruled in by the line judge and the Argentine's challenge to the decision came to nothing because the Hawk-Eye ball tracking system did not work due to a failed internet connection.

Federer, who won three consecutive titles at Indian Wells from 2004 to 2006, held serve on the next point and then broke Del Potro in the next game with a forehand volley winner at the net to lead 2-0.

The next six games went with serve before Federer took the ninth to clinch the opening set in 37 minutes.

Del Potro was again broken in the first game of the second set, when Federer unleashed a powerful forehand cross-court winner, and also in the fifth following another forehand winner by the Swiss.

Federer then served out to book his place in the last four, saving one break point in the eighth game before sealing victory on his third match point when Del Potro netted his service return.

Del Potro blamed the Hawk-Eye controversy in the first game for his defeat, saying: "It was clearly out and the machine doesn't work. The chair umpire told me he made a mistake.

"After that, I was not concentrating in the match and Roger was playing better, taking all his opportunities. Roger did his job, and he's a good winner."

Federer said he had encountered similar problems before: "Crazily enough, when I played Rafa at Wimbledon, at six-all in the fifth, Hawk Eye wasn't available any more because of the light. That was great for us to know."