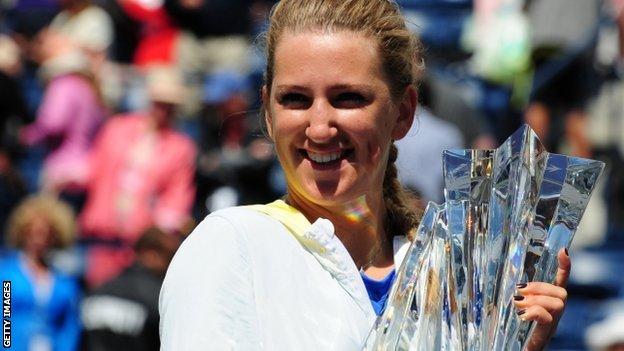 The world number one broke her Russian opponent's serve six times on her way to a 6-2 6-3 victory in surprisingly cold conditions in California.

It was the 22-year-old's 23rd consecutive win in 2012 and her second over Sharapova, following her Australian Open final success.

"I never dreamed about that," Azarenka said of her perfect start to the year.

"It's amazing. I just really focused on every match at a time. I'm not thinking too much ahead."

Azarenka, who won 6-3 6-0 in the Melbourne final in January, broke the world number two in the opening game before holding her own serve to take a 2-0 lead.

Sharapova won the third game but struggled to make any headway on the Azarenka serve, earning just four points on it in the first set.

The former world number one offered more resistance in the second set but when she finally broke for the first time, Azarenka already led 3-0.

Top seed Azarenka immediately broke back before Sharapova struck again in one of six breaks in the second set.

Serving to stay in the match, Sharapova hit a double fault before a high lob finished long to hand her opponent a 12th career title.

Azarenka's victory in Indian Wells extended her record this year to 23-0, the best start to a WTA season since Martina Hingis went 37-0 in 1997. Serena Williams began with 21 wins in 2003.

"I was just trying to do my best because I know Maria is a fighter," said Azarenka. "I always try to stay focused and apply as much pressure as I can.

"I'm just so glad that I have been able to be consistent and disciplined and professional every day."

Sharapova said: "She's extremely solid and she makes you work for every point. Ultimately she forces you to want to do a little bit more than either you should or would want to.

"She's playing with a lot of confidence. I just made too many unforced errors at the wrong time."