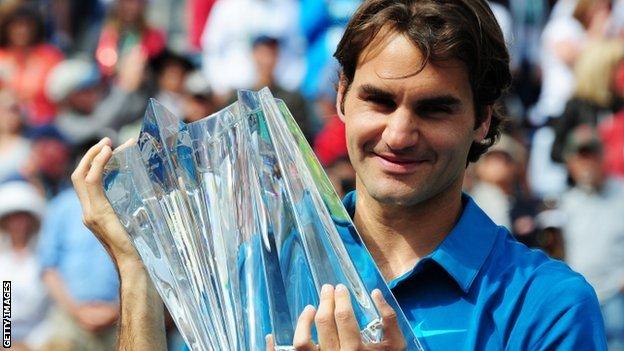 The third seed was pushed all the way in the first set, eventually taking it on a tie break.

Isner, despite beating Novak Djokovic in the last four, struggled against the Federer serve, taking only three points in the entire match in California.

"It's been a tough tournament for all of the players with a lot of sickness," said Federer, referring to the viral infection that forced eight withdrawals in the first week.

"I'm happy I survived the early rounds to give myself a chance. I couldn't be happier."

Isner elected to leave a lob which then hit the back of the baseline before Federer played out the set.

The American, who moved into the world top 10 with his win over Djokovic, bounced back by holding his serve to love in the opening game of the second set.

Federer, though, continued where he had left off, serving extremely well and winning seven consecutive service games to love.

He eventually broke Isner's serve twice to secure his 73rd career title and his 39th win in the last 41 matches.

"I think I have been playing extremely well since the French Open, but people aren't giving me enough credit sometimes for how great that tournament was because I didn't win it," said the 16-times Grand Slam champion.

"Same thing at Wimbledon. I thought I played really well there, too, and I was really in a good position to do something extraordinary there as well. Same thing happened at the US Open.

"So it was a tough spell for me, and important to stay calm and keep on working hard and maybe take minor adjustments and hopefully luck would turn on my side."

Asked about suggestions that he could regain the world number spot this year, Federer added: "It's not right now a goal for me in the short-term, because I can't be world number one because Novak has played amazing these last 12 months.

"Just because I have been on a great run doesn't mean he hasn't. And he might go and do another run or Rafa might go on his clay-court run again, and then all things become very difficult as well for me to get to world number one."