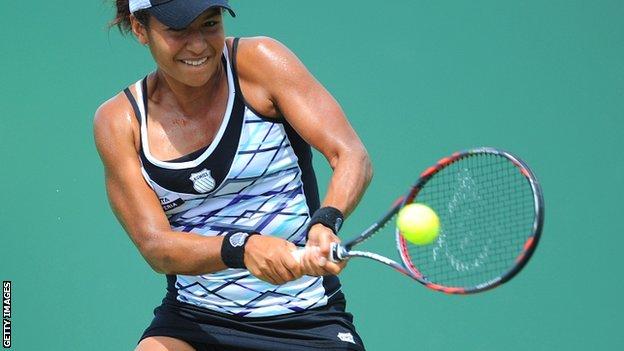 Britain's Heather Watson produced one of the best performances of her short career in the opening round in Miami.

Watson was a triple break down in the deciding set but launched an astonishing comeback, winning six games in a row and saving two match points.

The Scot, ranked 110 places ahead of world number 171 Zhang, would have played Serena Williams had she won.

Watson made a strong start against the 48th-ranked Cristea, winning the first set 6-3, in a match played in blustery conditions on the Grandstand Court.

Romanian Cirstea, a French Open quarter-finalist from 2009 and former world number 23, took the second 6-3 as she started to work her powerful forehand to good effect.

Cirstea powered through two successive Watson service games at the start of the decider to lead 3-0 and, after surviving two break points in the fourth game, added another break to go 5-0 up.

Then the comeback began, with Watson playing confidently and consistently from the back of the court, forcing errors particularly from the Cirstea backhand. She won six games in a row including a break for 5-5, saving two match points from 40-15.

It went into a deciding tie-break, in which Watson impressively held her nerve before being congratulated at the side of the court by her coach, Mauricio Hadad, Fed Cup captain Judy Murray and the watching Nick Bollettieri, former coach of Andre Agassi.

"I've been having a tough season, getting some tough draws," Watson told BBC Sport.

Watson won the US Open Junior title in 2009

"I'm just trying to find that confidence and the only way to do that is by fighting through every match I play.

"When it got to 5-0 I just thought I might as well just go for it. I just kept fighting for every single point and, in the end, it worked out in my favour.

"I'd been very cautious with my movement but now finally I am playing care-free with the ankle, not thinking about it. mI came back sooner than I should have because I wanted to play matches."

James Ward failed to secure a spot in the main draw of the men's singles, losing 6-3 6-3 in the final round of qualifying to Frenchman Edouard Roger-Vasselin, while Laura Robson lost her final qualifier 7-6 (7-4) 6-2 to Hungarian Melinda Czink.

Anne Keothavong, despite being the second seed in qualifying, was knocked out 6-4 6-3 by Japan's Misaki Doi in the first round, while Noami Broady was thrashed by qualifying top seed Kateryna Bondarenko of Ukraine, and Dan Evans lost to Germany's Bjorn Phau.