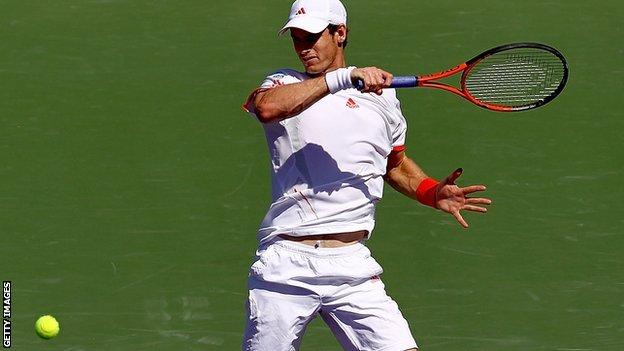 Great Britain's Andy Murray beat Colombian Alejandro Falla in straight sets to book a spot in the third round of the Miami Masters.

The world number four, who had lost his opening match in Miami in each of the last two years, eased through 6-2 6-3.

It was a return to winning ways for Murray, who was beaten in his opening match at Indian Wells two weeks ago.

After receiving a bye in round one, he will play Milos Raonic, who defeated Arnaud Clement 7-6 6-2, in the last 32.

"I played some good tennis, pretty solid throughout," Murray told BBC Radio 5 live. "I served well at the end of the first set and beginning of the second, and I didn't give him too many chances."

Following his shock defeat by Guillermo Garcia-Lopez at Indian Wells, Murray has been boosted by the presence of his coach Ivan Lendl in Miami.

And the Scot looked in good touch, breaking the left-hander's serve on five occasions en route to victory in one hour and 16 minutes.

Murray added: "A year or two years ago, if I had a problem, rather than getting the issue sorted I would let it drag on and it would affect me.

"Now, I'm able to deal with a bad loss because you get more mature. Having someone like Ivan around helps because he's been through many of those experiences and knows the right advice."

Murray took an instant break off the world number 71 for a 2-0 lead before Falla got back on serve with a break of his own.

However, Murray was able to move 4-2 ahead, before a third break closed out the opening set.

A further dropped Falla serve gave the Briton a 3-0 lead at the start of the second set, but again the South American fought back with a break of his own to trail 4-3.

But Murray's response was swift and decisive, breaking to love in the eighth game and then serving out for the match.

"After losing back-to-back opening matches in Indian Wells and Miami last year you could forgive Murray for starting a little nervously but the important thing was the way he overcame any early jitters. He does seem different now that Ivan Lendl has arrived on the scene. When you watch them in practice, there's an intensity that I've not seen before - everything has a purpose and he hits the ball with great ferocity. I wouldn't have wanted to be his brother, Jamie, at the net when he was rifling those groundstrokes. In the interview room Murray is open and more forthcoming than he used to be. All good signs. Milos Raonic in the next round will make for a fascinating match. They have yet to meet."

Murray is well aware of the threat posed by the 21-year-old in their first meeting.

"He started and finished last year pretty well and if he hadn't had groin surgery in the middle he would be ranked 10-15 spots higher.

"He's started this year well and won a couple of tournaments. He's a tough guy to play against."