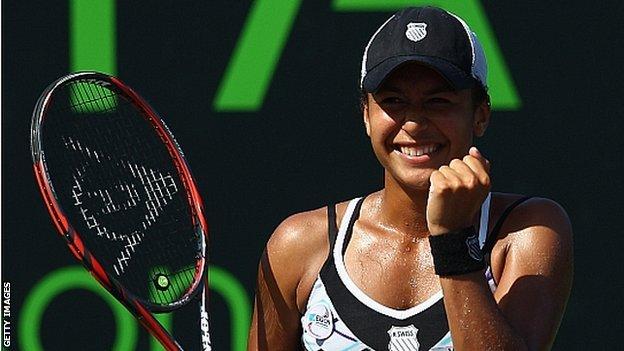 Britain's Heather Watson stormed into the third round of the Miami Masters with a superb 6-2 6-1 victory over world number 25 Lucie Safarova.

The 19-year-old wildcard from Guernsey, ranked 129, wrapped up her second-round win in one hour, 20 minutes.

"It was interesting that Watson stopped short of calling this the best win of her career but from where we were standing, watching her outlast and frustrate the world No.25, it looked like it. There is something uplifting about both watching Watson play and speaking to her afterwards - she loves to fight and compete, and she's unlikely to throw matches away. World No.1 Victoria Azarenka is the ultimate test in Women's tennis at the moment. Unbeaten in 24 matches, the Australian Open champion, and responsible for a 6-1, 6-0 drubbing when they met in Melbourne. But Watson was playing with an ankle injury at the time. She says she is now fully fit, and it will be fascinating to see if she can push the best player in the world."

Watson won 73% of first serve points to her opponent's 46%, and saved six of the seven break points she faced.

Watson next faces world number one Victoria Azarenka, who thrashed her 6-1 6-0 in the Australian Open.

In the first round, Watson saved two match points as she came from 5-0 down in the final set to beat world number 48 Sorana Cirstea.

Her second round victory was a much more straightforward affair as she broke Safarova in her first service game and then held to move into a 3-0 lead.

The next four games went with serve to give Watson a 5-2 lead before the Briton broke again to take the first set 6-2.

Safarova broke in the first game of the second set to threaten a comeback.

But the British competitor immediately broke back and surged to one of the biggest victories of her career to set up the meeting with Azarenka, a 6-3 7-5 winner over Michaella Krajicek.

But Ana Ivanovic had no trouble seeing off Vania King of the United States 6-4 7-5.

In the evening session, former world number Venus Williams, who has not played since pulling out of the US Open in August, claimed a stunning victory over Wimbledon champion Petra Kvitova.