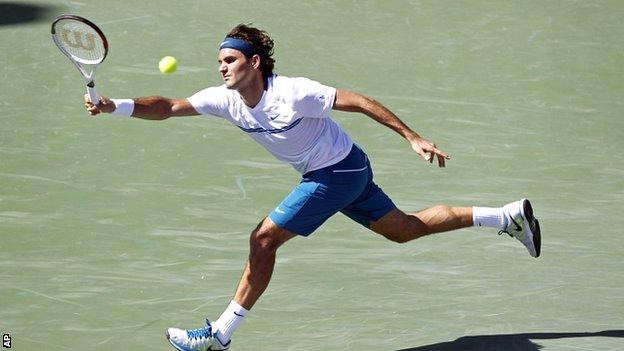 Roger Federer survived a scare to beat teenager Ryan Harrison and reach the third round of the Miami Masters.

The 16-time Grand Slam winner breezed through the first set, before letting a 5-2 lead slip in the next as the 19-year-old American forced a tie-break.

Federer looked set to beat Harrison in under an hour only to lose his serve at 5-3.

After missing a straightforward overhead, the 30-year-old then stopped playing when he mistook a shout from the stands for a linesman's call, and Harrison duly went on to secure the break.

The match continued for a further 25 minutes before the Swiss recorded his 40th victory in the last 42 matches.

Roddick, who did not face a break point as he beat Gilles Muller of Luxembourg 6-3 6-2, has dropped to 34th in the world rankings, the lowest he has been since 2001.

He has won only two of his 23 matches against Federer but did beat him at this event in 2008.

"There's no getting around the fact that he has been the biggest obstacle in my career," 29-year-old Roddick said. "His game matches up well against mine."

Federer said: "It's unusual to play Andy early in a tournament but I'm sure we'll have a great match."

Earlier, Serena Williams marched into the fourth round with a comfortable straight-sets victory over Italian Roberta Vinci, the world number 20, who is the highest-ranked player she has beaten this year.

Starting her match at 11am, she was finished shortly after midday, having hit 25 winners and committed 20 unforced errors.

"I'm not a morning person," said the 30-year-old, who is without a victory since August. "I actually hate morning matches, but I always do my best at 11 o'clock matches.

"I need trophies," she said. "I want to add more and to do more. There are records to break. So I'll do it. I've just got to believe it. I do believe it."