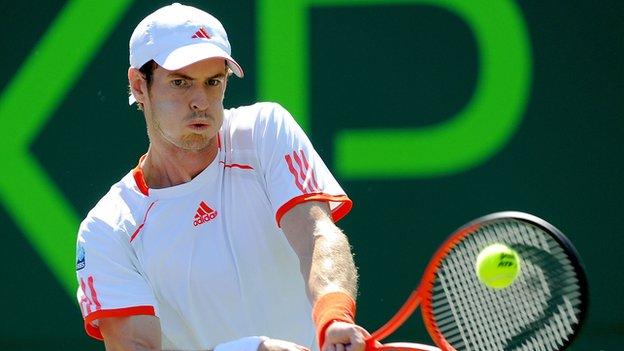 Andy Murray secured his place in the last eight of the Miami Masters with a 6-3 6-4 victory against Frenchman Gilles Simon.

He saved three break points in the first game before the Scot broke in the fourth to take the first set.

"The first game probably helped because I saved a couple of break points," Murray told www.atptour.com.

"After that, I kind of loosened up a little bit; felt much better.

"So that first game, even though it was like 17, 18 minutes, was probably a good thing after not playing for a few days."

World number one Novak Djokovic is also through to the last eight after beating Frenchman Richard Gasquet 7-5 6-3.

The Serb was again forced to work, saving six of his seven break points. He also only managed to get in 58% of his first serves, lower than that of his 17th-seed opponent.

After winning an opening game on his serve that lasted 17 minutes, Murray was always in control. This was the British No 1 at his professional best, working rallies, moving Simon side to side, and extending many of their exchanges to 40 strokes or more. Simon, so similar in style but just not as good, eventually wilted and a single break of serve in each set put Murray through. Afterwards, Murray explained that the difficulty of switching surfaces between hard court and clay was the reason for him not playing the Davis Cup tie against Belgium. Had it been on clay, or had he gone out early in Miami, he might have played.

His reward is a tie with Spaniard David Ferrer after he beat 11th seed Juan Martin del Potro 6-3 6-3.

Second seed Rafael Nadal is also through following a 6-4 6-4 win over Kei Nishikori of Japan despite having to take a medical break with a knee injury late in the opening set.

"I am not probably in perfect condition today with the left knee," he said. "But the important thing is to try to win as many matches as possible."

The Russian needed just 68 minutes to overcome the 2011 French Open winner, winning 58 of the 88 points played.

Former world number one Serena Williams will not add to her five Miami Masters titles after she was beaten 6-4 6-4 by fourth seed Caroline Wozniacki who set up a semi-final meeting with Sharapova.

"I probably played about 20%," Williams said. "I just made a tremendous amount of errors.

"There's no reason for that. I'm older and I shouldn't do that. There's no excuse. I've just got to stop that. It's silly."