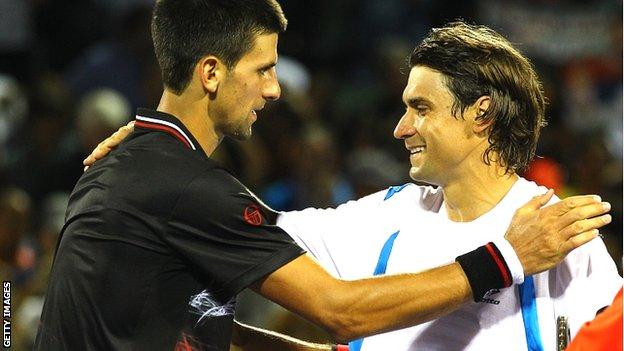 Novak Djokovic held off a strong fightback from David Ferrer to reach the semi-finals of the Miami Masters.

Ferrer recovered from a set and a break down - twice - to force a second-set tie-break, but world number one Djokovic came through 6-2 7-6 (7-1).

"David is a great competitor in every sense and I really wanted to get it done in straight sets as physically he is always there," said Djokovic.

The Serbian faces Juan Monaco on Friday after he thrashed Mardy Fish 6-1 6-3.

"I needed to play well, aggressive, step into the court from the first point and that's what I did," Djokovic added.

"I had a fantastic first set and was a break up in the second, twice, serving for the match.

"Then in some moments I allowed him to take control in the rallies and just waited for him to make an unforced error, which he used wisely and got back into the match.

"You can always expect that when you're playing David. He's like a wall on the court - gets a lot of balls back, always makes you play an extra shot."

Djokovic cruised through the first set in 32 minutes and broke Ferrer at the start of the second.

But any notion of an easy victory quickly vanished as the Spaniard broke straight back.

Djokovic restored his advantage to move 5-4 ahead yet Ferrer found the resolve to level again, only to succumb in the tie-break.

Monaco celebrated his 28th birthday with a crushing win against eighth seed Fish.

The 21st seed from Argentina won 71% of points on his first serve as Fish, whose only resistance came with a break in game six of the second set, was beaten in one hour and 22 minutes.

"I meant every shot that I played," said Monaco. "It was a perfect match for me. It was unbelievable. That was the way to celebrate my birthday, playing like this. I feel proud and very happy."