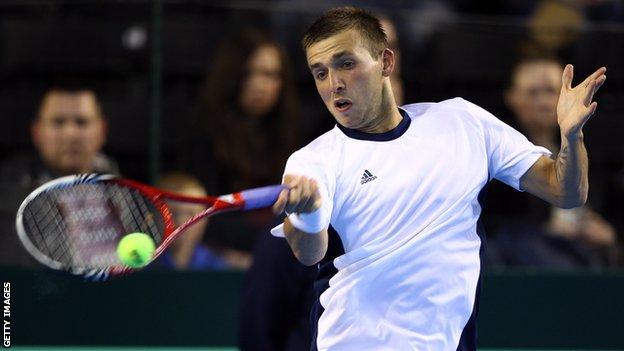 The British duo of Josh Goodall and Dan Evans both won their opening sets of their singles matches but went on to lose in four sets.

Victory in the tie at Glasgow's Braehead Arena would send Great Britain into a World Group play-off.

Goodall - playing in only his second Davis Cup match, in place of Andy Murray and the injured Jamie Ward - held his serve in the opening set before clinching the tie-break 7-2.

But he dropped the eighth game of the second set and immediately lost the opening game of the third with his first double fault of the match.

It was a pattern that was repeated in the fourth set when world number 68 Darcis broke Goodall's first service game before serving out the match.

The Belgian fought back to take the second set and won the third on a tie-break after Evans hit a forehand narrowly wide at 7-7.

Rochus, who was suffering from cramp, managed to serve out to put the Belgians in a strong position in the best of five tie.