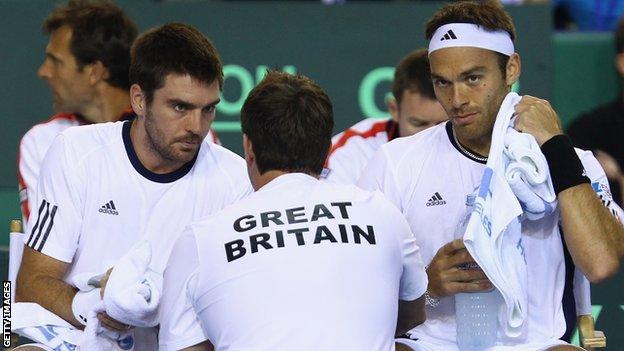 The last time Great Britain came from 2-0 down to win a Davis Cup match was against Germany in 1930.

Fleming and Hutchins had been given the task of keeping alive Great Britain's hopes of a Davis Cup victory following Goodall and Evans's singles defeats on Friday.

But it was Belgium who made the break in only the third game, thanks in part to the huge left-handed serves of Bemelmans.

After a slow start and many missed returns, Fleming and Hutchins gradually worked their way into the match, making their experience as a team show, to keep the tie alive. Now it's down to Josh Goodall to play the match of his life against Olivier Rochus on Sunday to give Britain a chance of an unlikely win. He'll be sent out with an extra-aggressive game plan and asked to express himself against an opponent who was struggling with a leg problem towards the end of his opening match on Friday.

With expectations suggesting a comfortable win, the British duo looked nervous and the Belgians held serve to take the first set.

Despite Hutchins's first double fault of the match in the opening game of the second set, GB went on to secure the first game.

Fleming halted Bemelmans's bombardment of 100mph serves in the sixth, and despite the Belgians breaking back in the ninth, Britain break again to take the set.

The third went with serve until the sixth game when a fantastic cross-court backhand from Hutchins left Goffin at a standstill for GB to make a key break, before serving out the set.

Great Britain broke in the ninth game of the fourth set, with Hutchins volleying a winner at the net on break point after Fleming had brilliantly returned Goffin's deep serve.

Hutchins then held serve, finishing with an 112mph ace down the centre, to keep the tie alive.

Goodall, ranked 253, was due to face Olivier Rochus, who has been in the top 100 for most of the last 12 years, in Sunday's first game, but he was forced to pull out with a leg injury, and has been replaced by Goffin.

Then Evans meets Darcis, who is ranked 276 places above him.

However, Hutchins thinks that both British players are capable of causing a shock, after creditable performances in their first singles rubbers on Friday.

"I thought yesterday's tennis was of an unbelievable standard, both from our boys and theirs," he said.

"If they bring that same level tomorrow, which I have no doubt that they can, we can win this tie 3-2.

"The boys are going to go for it."