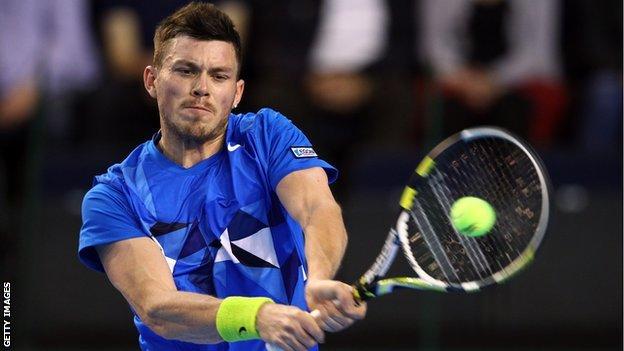 Great Britain were beaten 4-1 by Belgium in the Davis Cup, condemning Leon Smith to his first defeat as captain.

Britain's Joshua Goodall was edged out by David Goffin in three sets, 6-4 6-4 6-4, in the fourth rubber of the Europe/Africa Zone Group I tie, and Dan Evans lost by the same score to Ruben Bemelmans in a dead rubber.

Goffin needed just one early break in each of the first two sets. He was finally broken in the third, but was still too strong and clinched victory.

Goffin showed little sign of his relative inexperience in Glasgow, particularly while serving - most notably when he reeled off 15 unanswered points from his own serve at the start of the second set.

David Goffin's winning forehand pass was a shot worthy of winning any tie. He looks a fine prospect, rising to the challenge of being thrown into the fourth match for the injured Olivier Rochus, and Belgium were the better team. But not by much. Britain, comfortably out-ranked in the singles, made it a close and entertaining weekend thanks to Dan Evans and Josh Goodall fighting as hard as they could without any sign of resignation. Good to see. And without Andy Murray, Britain can't realistically expect to do much better against teams like this.

The Liege-based right-hander did a good job of targeting Goodall's backhand and moving him around the court. In contrast, Goodall's serve - expected to be a strength - was below its best with the Belgian enjoying more success with firing in aces.

Belgian number one Olivier Rochus had been declared unfit to play in the morning, having suffered from thigh cramp in his win over Dan Evans on Friday, but any optimism generated by that news was soon dampened.

Replacement Goffin, 21, was playing in his first Davis Cup tie but slotted in confidently and made a strong start. Goodall was broken in his second service game and the rest of the first set went with serve, the Belgian wrapping it up in 44 minutes.

Umpire Lucy Grant then made a brave call when she over-ruled an apparent Goffin winner on break point in Goodall's first second-set service game. But the Belgian quickly made the breakthrough in the Brit's next service game as the Basingstoke-born player mis-hit a ground-stroke on break point.

Goffin was getting a grip on the match and showed little sign of allowing Goodall a sniff of recovering, sealing the first three of his service games to love, to surge into a 4-2 advantage.

The Belgian had to fight harder to win his next service game but battled through to go 5-3 ahead. Goodall showed his character when, after going 0-40 down in the next game, he turned things around to hold - but could not stop another 4-6 reverse.

It was a difficult start to the third set though as the Brit was forced to save break point in the opening game, which he managed. Momentum was against Goodall and there was a sense of deja vu when he was broken in the third game of the set - for the third time in a row.

There was finally something for the home crowd to cheer when Goodall broke back instantly. The third set was becoming a far more hard-fought affair with Goodall successfully saving six break points to hang on for a 3-2 lead.

When Goffin wrestled back the momentum to break again the seventh game, there was no way back.

Evans, so impressive against Rochus on Friday and also in beating two higher-ranked players to win the Slovakia tie, admitted he had found it difficult to motivate himself for the final match of the weekend.

"No-one really likes to play dead rubbers do they?" he said. "I did struggle at the start to get going. I was down that the team had lost."