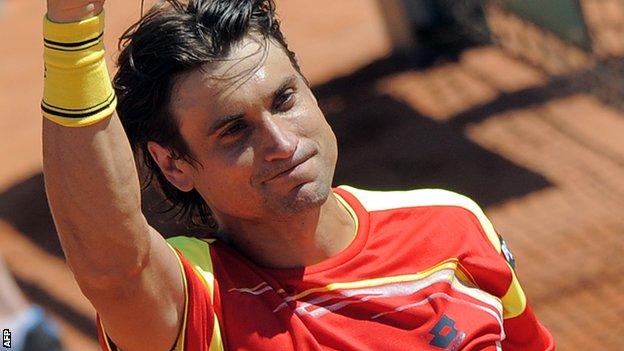 Ferrer, 30, secured an unbeatable lead to set up a September meeting with the United States after John Isner's win against France's Jo-Wilfried Tsonga.

"It was a tough match, with a lot of wind," Ferrer said. "In the important moments I think I played better."

On the other side of the draw, the Czech Republic will face Argentina.

Fifth-seed Ferrer had originally said he would sit out this season's competition along with Spain's top-ranked player Rafael Nadal after the pair had helped secure three title victories in four years.

His return for the quarter-final stage was vital after Spain lost Saturday's doubles rubber in Oropesa del Mar to head into the final day's play one tie up.

Ferrer broke Melzer in game 12 of the opening set, and followed this up with double-breaks in the final two sets.

Nicolas Almagro later defeated Alexander Peya in a dead rubber contest to complete a 4-1 victory for Spain, while the USA finished up 3-2 winners over France.

"I had a great week of practice and I was ready to go," said Isner. "Just like on Friday, I came out there and played very well and I'm just very thrilled with my performance. I'm very happy that our team is going on to the semi-finals."

The Czech Republic secured a 4-1 series victory on home soil against a Serbian side minus the talents of world number one Novak Djokovic.

Seventh seed Tomas Berdych won the crucial leg against Janko Tipsarevic to allow his nation to advance to a last-four contest against Argentina after they beat Croatia by the same scoreline.

Past US Open winner Juan Martin del Potro avenged compatriot David Nalbandian's opening defeat against Marin Cilic to give his country an unassailable 3-1 lead in Buenos Aires and passage to the next round.