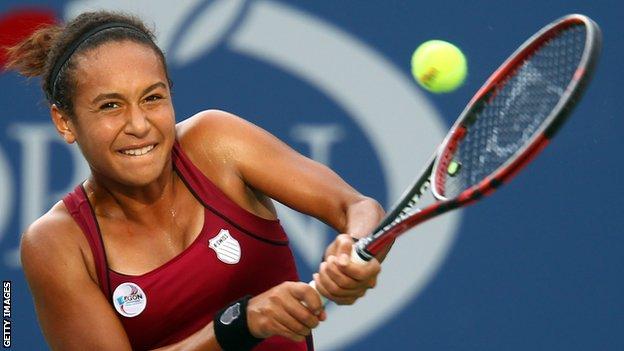 Heather Watson has set herself an ambitious target of winning the singles gold medal at the London Olympics.

The British number three, currently 116th in the world, is likely to need a ranking inside the top 70 or hope for a wildcard to compete at the Games.

"An Olympics in your home country is a once-in-a-lifetime opportunity and it's my priority for the year."

Watson finished 2011 ranked 92nd before an ankle injury - sustained playing football during a practice session - contributed to her fall at the start of this year.

For the Olympics, 56 players will gain direct acceptance to the singles main draw but there can be no more than four from a nation.

With Russia and Germany among those boasting more than four players in the top 56, the list will probably extend to around the 70 mark (the cut-off at the 2008 Olympics was 67).

The International Tennis Federation Olympic committee will then grant six wildcards and most of these have previously gone to players ranked just below the cut-off with one place per nation, though this is not a rule.

"Every December for the past five years I've sat down with my dad, talked about how I've done and what I want to do in the new year," said Watson at the launch of the 2012 Aegon Classic at the Edgbaston Priory Club.

"This year, the main topic was the Olympics because it doesn't come around very often and, even if it does, having it in your home country is another thing altogether.

"We've talked about it so much. For a tennis player, you'll play in the Olympics once - maybe twice - and I'd love to be a part of it.

"In tennis, for women's singles, there's one gold medal. One. That's it!"

In normal circumstances, Watson would spend late July and early August training and competing in North America ahead of the US Open.

But this year she will be in London regardless of whether she makes it to the Games.

"I definitely don't want to be there [in the US] during the Olympics but I don't think I would be, I think I'd be here anyway," she explained. "I mean, you can't miss it.

"Growing up, I always watched the Olympics. I watched the track more than anything, and I love watching the gymnasts as well. Usain Bolt sticks out for me, he's awesome."

Watson has been named alongside Baltacha, Keothavong and Robson in the Fed Cup Team for the upcoming tie against Sweden on 21-22 April.

The team is unchanged from the one that won the World Group II play-offs, beating the Netherlands, Israel and Portugal in the Euro/Africa Zone Group I competition and then Austria in the promotion play-off.