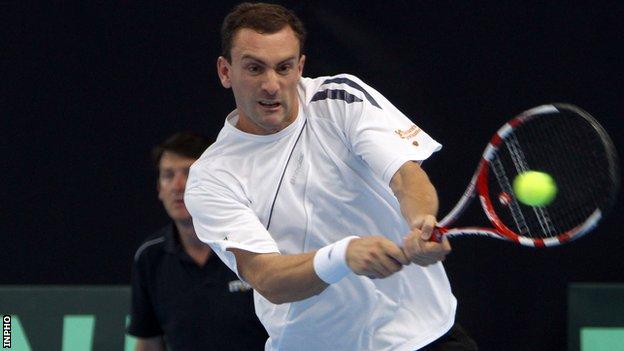 Irish number one Conor Niland has been forced to retire from tennis because of a persistent hip injury.

Last year Niland, 30, became the first Irishman to qualify for the main singles draw at Wimbledon since 1984.

The Limerick man lost a thrilling five-set match against France's Adrian Mannarino in his first-round clash.

Niland went on to qualify for the first round of the US Open but he had to retire after only two sets against Novak Djokovic because of illness.

The Irishman achieved his highest world ranking of 129 in December 2010 and won 17 of his 29 Davis Cup matches for his country.

Niland won three events on the ATP Challenger Tour, with his most recent title coming at the Salzburg Indoor tournament in 2010.

He was also an occasional practice partner of British star Andy Murray.

"I am today sadly announcing my retirement from professional tennis," said Niland in a statement on Thursday.

"I have been suffering from labral tears in both hip cartilages and this has resulted in pain and restricted movement for the past nine months.

"Despite several cortisone injections and intensive physiotherapy during this time, the condition has progressively worsened and has prevented me from training and competing at the levels required for professional tennis.

"I have considered the possibility of hip surgery but have been advised of a lengthy recovery time without any guarantee of a successful outcome."

Niland, whose sister Gina was a former Irish women's number one, had his final competitive match in last week's Davis Cup tie against Egypt when he helped Ireland earn a 3-2 victory.