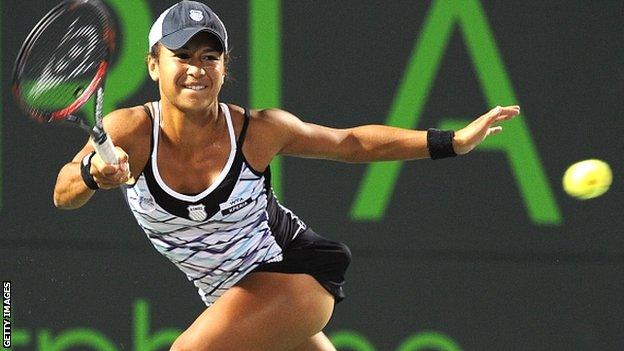 Heather Watson was growing accustomed to life in the upper reaches of women's tennis when it was cruelly swept from beneath her feet.

Watson broke into the top 100 of the world rankings for the first time last June, rose to a career-high 87th in September and ended the campaign at 92nd.

A punishing winter training block suggested even better was to come in 2012 - only for injury to strike in the most frustrating of circumstances.

Rounding off her final pre-season session in December with a light-hearted game of football, Watson went over on her left ankle and sprained the ligaments.

Heavy strapping limited the absence to a couple of weeks but discomfort remained and her ranking slipped to 129th. The setback has been difficult to accept.

"It definitely hurt," the 19-year-old tells BBC Sport. "Seeing your name in two digits is so much better than seeing it in three.

"I got to 87 and felt like I really belonged there. It gives you this confidence just walking around, you know? Other players start looking at you different.

"Tennis is such a mental game and confidence is everything."

Watson admits it was not until mid-to-late March that she finally started to feel 100% fit and that coincided with a magnificent run at the Sony Ericsson Open in Miami.

She recovered from 6-3 5-0 down to stun 48th-ranked Sorana Cirstea in the first round and thrashed Lucie Safarova, ranked 25th, 6-2 6-1 in the second.

On Elena Baltacha: "Very patriotic and a real fighter. So intense on court she'll actually screams straight at you - it's scary but brilliant."

On Anne Keothavong: "Funny, nice and girlie away from the court, Annie can be really mean on it. We all need a bit of that!"

On Laura Robson: "My doubles partner and fellow cheerleader, the 'happy pants' (baggy, multi-coloured trousers) she brings to Fed Cup are horrible but make me laugh."

On Judy Murray: "Our captain but very laid back, one of the girls and an amazing team player. Calls me 'muchacha' and has taken us all under her wing."

On herself: "Fun to be around, I make everyone play the Wii dance game (I always win). Positive influence and help ensure team spirit is high."

Her ranking is up to 115th but it must continue to improve if her dream of winning gold at the London Olympics is to have a chance of materialising.

"I need to get used to playing more rounds in these bigger tournaments because I can and I've proved that," she explained.

"I've played [world number one] Victoria Azarenka twice now and it shows me where I want to be and what I need to do to get there. I need experience of playing big matches and more belief in my own ability."

Coached by Mauricio Hadad, the Colombian who guided Maria Sharapova to the Wimbledon title as a 17-year-old in 2004, Watson is certainly in good hands.

Like Sharapova, she is a product of the famous Nick Bollettieri Tennis Academy, but, at 5ft 7ins, her game is more about movement and guile than raw power.

She has worked tirelessly on her physique - which made December's injury all the more aggravating - and feels ready to go toe-to-toe with the game's leading names.

"One thing I'm doing better on the court is giving players less respect," continued Watson, who only turned professional three years ago and was ranked 588th as recently as 2009.

"You can't give them any respect on the court. Off the court, fair enough. But on the court it's just you and the other player and you've got to do everything you can to beat them."

Watson will hope that attitude stands her in good stead this weekend when Great Britain play Sweden in a crucial Fed Cup tie in Boras.

She is expected to partner Laura Robson in the doubles, while Elena Baltacha and Anne Keothavong take care of singles matters.

Victory for Judy Murray's side, who won three matches to reach this stage, would earn GB a first taste of World Group action since 1993.

"We have a great team this year and I always thought we were going to qualify," said Watson. "When we got through I was obviously very happy but I expected us to.

"Now that we have this opportunity to go into the World Group, we have to take it. We need to take it and prove we deserve to be among the best teams in the world."

Priorities will then switch to a crucial period of the season, with the French Open at the end of May, followed up by the UK grass-court swing and the Olympics. All eyes will again be on the Brits.

"The pressure doesn't affect me," added Watson. "I've always believed in myself. I know that I can play these top players and win these big matches.

"It's nice to have expectations because it shows that people are watching and think you can do well. It's better than having none at all."

If she can establish herself permanently in the upper echelons of women's tennis, Watson will deserve every ounce of expectation that comes her way.