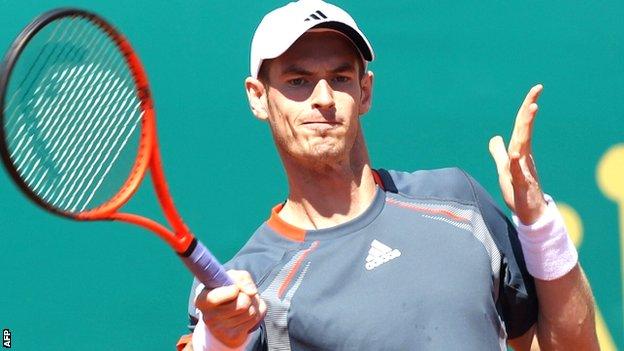 Andy Murray marked his first clay-court outing this season with an emphatic victory over Viktor Troicki to reach round three of the Monte Carlo Masters.

The Scot mixed aggressive attacking play with dogged defence to dominate his Serbian opponent throughout, winning 6-0 6-3 in 67 minutes.

British number one Murray, who received a first-round bye, will next play Julien Benneteau or Jurgen Melzer.

"It was a good start," said third seed Murray.

"Normally it has taken me a few matches to get used to the clay, but today I moved well from the beginning and that's really important for me on this surface.

"I haven't had much time on clay to work on things - I will get that in the next five or six weeks before the French Open."

Murray could not have wished for a better start to the clay season, improving his career record against Troicki to 5-0 with minimal fuss.

The world number four served and returned brilliantly to move 4-0 up for the loss of just two points.

Troicki, ranked 30th, fought back from 0-40 to level game five, only for a brilliant defensive winner to hand Murray the triple-break.

He served out the 27-minute first set and, despite facing greater resistance early in the second, gained the crucial break in game three.

He took Murray to five sets at the French Open but was eased aside this time and has now lost 24 straight matches against top-10 players.

The Murrays will now face top seeds and defending champions Bob and Mike Bryan in the second round on Wednesday.