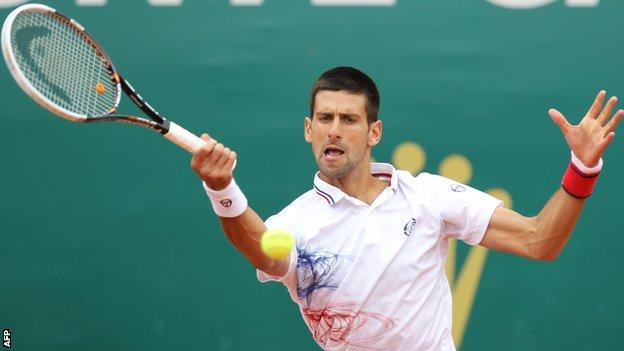 The 24-year-old secured a 6-1 6-4 victory in one hour 27 minutes in his debut clay court outing of the season.

In the other stand-out tie of the round, defending champion Rafael Nadal beat Finland's Jarkko Nieminen 6-4 6-3.

The Spaniard was in action for the first time since he had to pull out of the Miami Masters with a knee injury.

Djokovic, who received a first round bye, will now play Ukrainian Alexandr Dolgopolov after he beat Bernard Tomic.

"It takes about a week to get used to the clay," he said. "I had a tough match but I'm glad to get through."

The opening stages underlined the gulf in class between Djokovic and his 44th-ranked opponent as he raced to a 4-0 lead in 19 minutes.

Djokovic appeared to ease off in the second set after he forced an early break of serve, and was happy to edge towards a seventh career win against Seppi.

After he missed last year's tournament because of fatigue, Djokovic is hoping to take the title of reigning champion Nadal, who has won the event for the last seven years.

The 25-year-old held off a determined challenge from Nieminen to win in straight sets.

Nadal had taken 15 days off after he pulled out of the semi-final meeting with Britain's Andy Murray in Florida at the end of March, the long-term tendonitis sufferer complaining of pain in his left knee.

An under-cooked Nadal hit less winners than his opposite number in the opening set, but showed why he has dominated the sport on clay as he kept Nieminen at arm's length in the second.

Nadal's reward is a third round meeting with Kazakhstan's Mikhail Kukushkin, who beat Italy's Filippo Volandri.

British number one Murray, who beat Viktor Troicki in the second round, will play Julien Benneteau or Jurgen Melzer next.