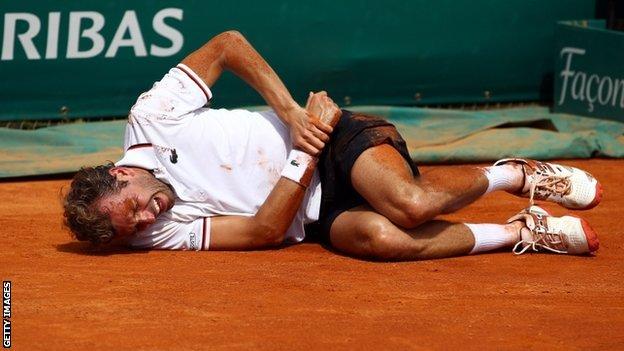 Britain's Andy Murray moved into the quarter-finals of the Monte Carlo Masters after France's Julien Benneteau retired with an ankle injury.

The match was finely poised at 5-5 in the first set when Benneteau turned his right ankle while chasing down a shot.

He received lengthy treatment at the time and took another medical timeout at the change of ends after Murray had served out the 11th game.

Murray will play the Czech Republic's Tomas Berdych in the last eight.

Berdych lost the opening set of his third-round game against Japan's Kei Nishikori but hit back to take the match 2-6 6-2 6-4.

He will take on a relatively fresher Murray, who spent a little over an hour on court before Benneteau's retirement.

"It looked like quite a bad one, also his wrist, he fell quite heavily onto," said Murray, "Hopefully it's not too bad."

Murray, 24, had taken a 2-0 lead but both games had gone to deuce and Benneteau showed great tenacity to immediately break back in a game that featured four deuces - the Frenchman eventually winning on a fifth break point.

The set then went with serve until Benneteau's unfortunate accident.

It initially looked as though the 30-year-old's right wrist was causing him the most pain when he hit the floor after attempting a trademark slide on the red clay.

But the medical staff immediately concentrated on his right ankle, applying ice before strapping it up.

Benneteau, who also received treatment on his right wrist and forearm, tried to continue but Murray easily won the remaining two points of the 11th game.

And as he hobbled out after receiving more treatment at the change of ends, Benneteau decided to retire.

"It was a tough match, a lot of long games, quite a few long rallies," said Murray.

"He plays a different style of tennis on the clay.

"A lot of the guys work the points quite a lot, play with more topspin and stuff.

"He has so much power, he's able to go through the court, hit pretty flat."

Murray later partnered his brother Jamie in the doubles, losing 7-5 6-4 against top seeds and defending champions Bob and Mike Bryan of the United States.