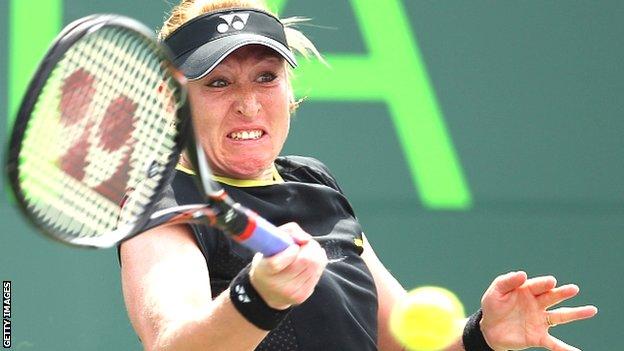 The British number one, 63rd in the world, plays her 71st-ranked Swedish opponent at 1300 BST on Saturday.

They will be followed on court at Borashallen by British number two Anne Keothavong, 79th in the world, and 54th-ranked Swede Sofia Arvidsson.

The reverse singles and a doubles rubber take place on Sunday.

"We have great strength in depth in our team," said GB captain Judy Murray, whose side came through three rounds to reach this stage.

"It's an absolute luxury to have four players who are all capable of playing singles at this level. It will be a very closely contested tie with Arvidsson and Larsson very similarly ranked to Baltacha and Keothavong.

"If the players perform, which I know they can and will, then I don't see any reason why we can't win this tie."

Heather Watson and Laura Robson will form the British doubles pairing against Arvidsson and Larsson.

"We've had four really good days of practice and are all very much enjoying ourselves," said Watson. "It's been a bit chilly, snowing on our first day here, but it's a lovely place and I'm looking forward to the weekend.

"We're all playing well and we've been doing some scouting on our opponents, so we'll be going in very well prepared."

Victory for GB in the best-of-five tie would see them promoted to the World Group for the first time since 1993.

"It's always exciting, Fed Cup," said Baltacha. "I'm really up for the match, first up tomorrow. I've never played Larsson before but I'll get the fist pumps going. It'll be a great atmosphere in there and I'm ready to go."