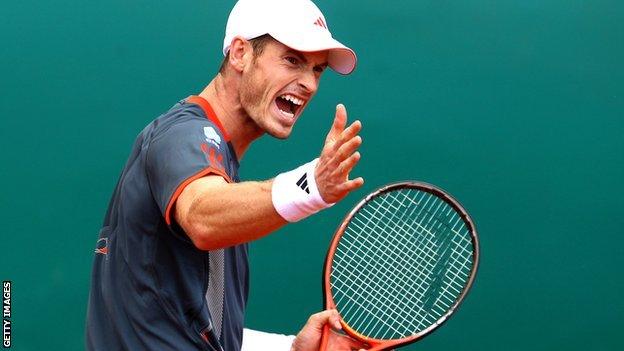 The British number one saved four set points before edging the opener.

But the 24-year-old's game deserted him as sixth seed Berdych took control with two breaks of serve in the second set and three in the third.

Andy Murray had met Tomas Berdych on clay only once before in his professional career, when the Czech won 6-4 7-5 3-6 at the 2010 French Open

Czech Berdych will play Novak Djokovic in the semi-finals as Murray turns his attention to the Barcelona Open.

"Today is a good match to learn from because I was playing a top player who played very, very well.

"I hung in, in the first set. Then in the tie-break I got a few lucky bounces. He missed a couple of shots that he hadn't been missing.

"At the start of the second set he obviously started playing better and my level dropped - as the scoreline suggests."

The Scot, who reached the quarter-finals after Julien Benneteau retired with an ankle injury, held his nerve in a closely contested first set as neither player managed to break serve.

However, Murray struggled as Berdych found the range to accompany his powerful groundstrokes.

He lost the second set comfortably and was broken at the start of the third as the match swung decisively towards 26-year-old Berdych.

Murray became increasingly frustrated, cursing to himself and smashing a racquet on the court, as 6ft 5ins Berdych booked his place in the last four and looked forward to a meeting with Djokovic.

"It's a day to play the number one player in the world, which is always great. It's a semi-final, which is fantastic," said Berdych.

"But still, I want to play my best tennis and I want to do well. I just want to focus on myself and do my best on court."