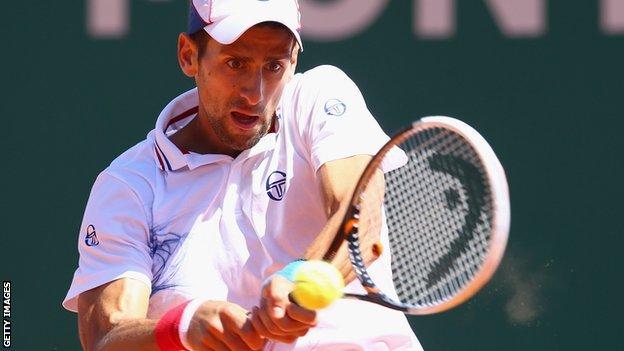 A grieving Novak Djokovic reached the semi-finals of the Monte Carlo Masters, despite admitting that he could not fully focus during his last-eight tie.

The world number one, whose grandfather died on Thursday, dropped serve four times as he beat Robin Haase 6-4 6-2.

"It's tough to be able to play tennis after the way I felt and the way I still feel," said Djokovic.

Over the years, I've learned whenever I play tennis to kind of switch off from everything else

Djokovic, who will play Tomas Berdych in the semi-finals after the Czech beat Andy Murray, came through an emotional match on Thursday after playing just hours after the death of his grandfather. He revealed he had considered withdrawing from the event.

"Yes, I did. But I'm a professional and life goes on," he said. "I know that I cannot change anything now.

The Serbian Wimbledon, US Open and Australian Open champion added: "Any time is the wrong time to receive that news. Today was a bit better, but still a lot of emotional ups and downs throughout the match. I got to the semi-finals, which is big result for me under the circumstances.

"Over the years, I've learned whenever I play tennis to kind of switch off from everything else.

"You get that mindset and that ability to switch off when you dedicate a lot of time to this sport."

The top seed, who struggled against Alexander Dolgopolov in the previous round, looked more like his usual self in the opening stages against Haase with two breaks of serve giving him a 4-1 lead in the opening set.

The Dutchman responded with two breaks of his own to level the scores, but another break for Djokovic was enough to give him the set.

Djokovic looked distracted at times, missing a first chance to serve out for the match at 5-1 before breaking the unseeded Haase for the seventh time to seal victory.

Nadal, chasing his eight consecutive title in Monte Carlo, saw off a spirited challenge from unseeded Swiss Wawrinka to book a meeting with Simon, who won the all-French battle with Jo-Wilfried Tsonga 7-5 6-4.

The Spaniard is playing his first tournament since a recurrence of his knee problems forced him to withdraw from his semi-final against Andy Murray in Miami on 1 April.

After exchanging breaks, Nadal won three games in a row to claim the first set, then a break at the start of the second was enough to see him through.

"Yesterday and today I improved a level," he said. "Today was a difficult match. I had respect for the opponent. He arrived playing great having had a fantastic victory ."