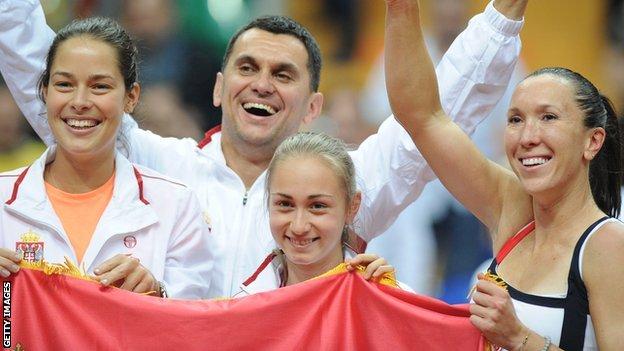 Serbia reached the final of the Fed Cup for the first time after Jelena Jankovic beat Svetlana Kuznetsova to give them 3-2 win over Russia.

The match was tied 1-1 after the first day before Ana Ivanovic beat Anastasia Pavlyuchenkova 3-6 6-0 6-3.

Jankovic then wrapped up the tie with a 6-1 6-4 win over Kuznetsova in Moscow, to give them an unassailable 3-1 lead.

They will face the Czech Republic in the final following their 4-1 win over the world number one nation Italy.

Wimbledon champion Petra Kvitova and Lucie Safarova put the Czechs 2-0 up against Italy after day one.

Kvitova saw off Sara Errani 6-4 6-3, following on from Safarova's 7-6 (7-3) 6-1 demolition of Francesca Schiavone in the semi-finals in Ostrava.

The Czech Republic enjoyed success over Italy in their semi-final, playing their matches on indoor hard court. But in Russia, the hosts and Serbia were competing on an indoor red clay surface with clay court balls.

Kvitova's third-rubber 6-4 7-6 victory over Schiavone then confirmed their place as they took an unassailable 3-0 lead.

Italy did win one rubber when Errani beat Andrea Hlavackova 2-6 6-2 6-2 before the victory was completed when Errani and Flavia Pennetta were forced to retire from the doubles, leading 6-5 in the first set, because of a wrist injury to Pennetta.

Serbia were playing in the semi-finals for the first time and they took the lead when Jankovic eased to a 6-4 6-3 win over Pavlyuchenkova in the opening rubber.

But they lost their advantage as Ivanovic, who won the French Open in 2008, fell 6-2 2-6 6-4 to two-time Grand Slam winner Kuznetsova.

Ivanovic and Jankovic were then both in impressive form on Sunday to win their respective matches and secure their place in November's World Group final.

"I'm very happy to win the deciding point for my country," said Jankovic.

"It's the first time that Serbia have made the Fed Cup final and I'm proud to be a player in this team."