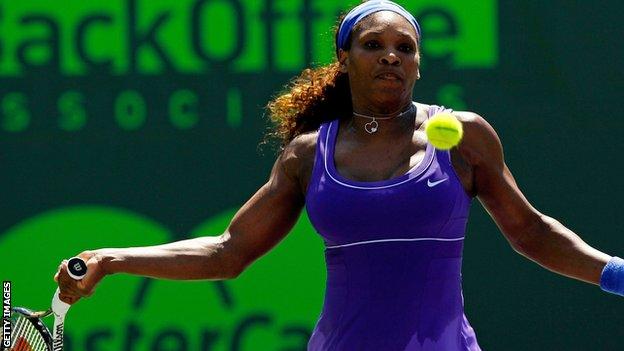 The USA secured their place back in the Fed Cup World Group with a crushing 5-0 win over Ukraine.

Serena Williams was in impressive form, winning both her rubbers and losing just eight games as they bounced back from Group II at the first attempt.

In the other play-off matches Japan beat Belgium 4-1 to reach the World Group for the first time since 2007.

Slovakia beat Spain 3-1 while Australia also secured their promotion with a 3-2 win over Germany.

The USA were playing in the second tier of the tournament for the first time, after suffering relegation last year.

But they made easy work of Ukraine in Kharkiv and were 2-0 up after the first two rubbers.

Williams then beat Tsurenko 6-3 6-2 to wrap up the victory.

But the USA, who have won a record 17 Fed Cup titles, were not finished yet and went on to complete the whitewash.

Kimiko Date-Krumm, 41, was the hero for Japan as she won two rubbers to help them overcome Belgium.

Uytvanck then played her third rubber as she linked up with Ysaline Bonaventure in the doubles but was beaten 6-2 6-4 by Date-Krumm and Rika Fujiwara.

Australia were also two rubbers to the good after day one as they took onGermany in Stuttgart.

Sam Stosur's 7-6 (7-1) 6-4 win over Angelique Kerber and Jarmila Gajdosova's 6-4 6-4 victory over Julia Goerges put them in a strong position going into day two.

World number 11 Andrea Petkovic was forced into action earlier than planned for the Germans as they looked to claw their way back into the tie.

After three months out injured she was scheduled to only play the doubles but instead took on Stosur, although she could do little to prevent the Australian winning the match 6-4 6-1 and therefore the tie.

The tie was level at 1-1 after the first leg with Dominika Cibulkova winning 6-3 6-0 against Lourdes Dominguez Lino before Hantuchova was beaten 7-6 (7-5) 6-4 by Silvia Soler-Espinosa.

Cibulkova then beat Soler-Espinosa 6-4 6-4 to give Slovakia a 2-1 lead and Hantuchova secured their return to the world group.