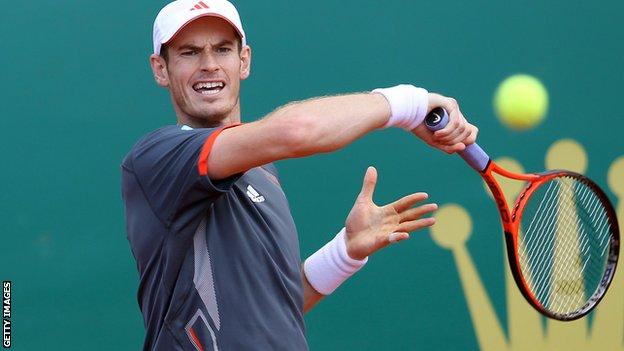 Second seed Andy Murray produced a clinical performance to beat Sergiy Stakhovsky 6-3 6-2 in the second round of the Barcelona Open.

The world number four faced few problems as he overcame his Ukrainian opponent in 78 minutes.

It was the perfect response from Murray after his quarter-final loss to Tomas Berdych in the Monte Carlo Masters.

Stakhovsky, ranked 68 in the world, proved no match for Murray, who is behind Rafael Nadal in the seedings.

The Scot will next face either Robin Haase or Santiago Giraldo in the third round in what is his first appearance in the Spanish clay-court tournament in four years.

Murray survived a brief scare in the opening game against Stakhovsky when he needed to save a break point on his own serve.

But after that he rarely looked in serious trouble against an opponent he had beaten on each of their previous three meetings.

The key break in the opening set came in the fourth game when Murray earned himself three break points.

He failed to make the most of the first two opportunities as Stakhovsky, 26, battled back from 15-40 to deuce, but Murray made no mistake with his third chance to take a 3-1 lead in the set.

After the next two games had been comfortably held, Stakhovsky had a chance to break back in the seventh when he edged 40-30 ahead on Murray's serve.

But the Ukrainian was again unable to capitalise as Murray recovered to take a 5-2 lead.

Stakhovsky battled hard to take the eighth game to make it 5-3, but Murray wasted little time wrapping up the set as he held the ninth game to love.

Murray then made short work of the second set to seal his spot in the last 16.

The British number one rattled off four successive points to recover from 40-15 down to break Stakhovsky in game three and take a 2-1 lead.

There was no looking back after that, Murray at his ruthless best to book his place in the next round.