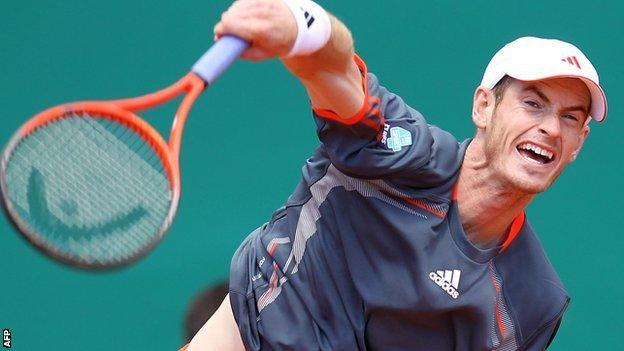 Andy Murray breezed into the quarter-finals of the Barcelona Open with a 6-1 6-2 victory over Colombian Santiago Giraldo.

The Scot, 24, always looked in control, displaying encouraging assuredness on clay with the French Open looming.

Murray was relentless and possessed far too much quality for his opponent. He will play 11th seed Milos Raonic in the last eight on Friday.

Also into the quarter-finals is Rafael Nadal, who beat Robert Farah 6-2 6-3.

Murray very quickly asserted himself in the opening set and, although his first serve was less accurate than Giraldo's, those that the British number one did execute correctly were too good and helped him take command.

There appeared to be a loss of concentration for a brief spell early in the second, but he still never looked under pressure.

Murray had broken quickly to take a 2-0 first-set advantage but was made to face two break points in the next game. He saved both with aces, going on to build a 3-0 lead.

After that dominant start, the three-time Grand Slam finalist's superiority continued to shine through in the remainder of the set and some smart play from the baseline helped him break again on the way to recording a deserved 6-1 success.

Giraldo, 24, could not afford to surrender another early break in the second set, yet he did just that in the very first game. But the world number 54 went on to show more fight after that and, having found some extra power and belief, broke back in the fourth game to level at 2-2.

It looked like Murray had a tough challenge on his hands, but he promptly showed his quality again to re-establish his two-game advantage. Once that cushion had been restored, he closed the match out professionally.

"I started the match well," said Murray. "I got ahead and put pressure on him from the start. He started going for more and making some errors.

"I've never played Raonic but he has a huge serve. I have to play a solid match. He can have some ups and downs, so if he makes errors and gives me chances I have to be ready to take them."