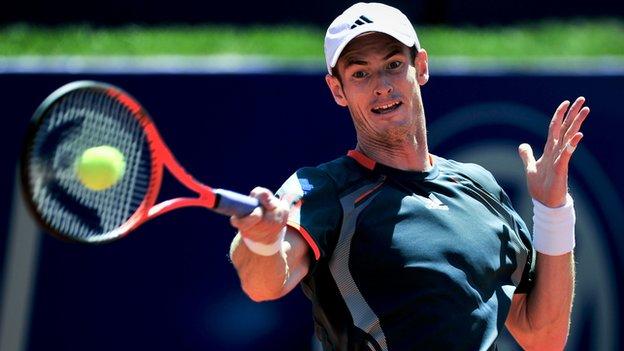 Britain's Andy Murray is out of the Barcelona Open after a straight sets defeat by Canada's Milos Raonic.

Murray struggled to deal with the huge serve of the 11th seed, going down 6-4 7-6 (7-3) to slip to his second quarter-final loss in as many weeks.

Murray managed his only break in the 10th game of the second set to stay in the match, but Raonic breezed through the tie-break to seal victory.

Raonic will play David Ferrer in the last four.

Murray had been due to play Raonic in the third round of the Miami Masters in March only for the 21-year-old to pull out with an ankle injury.

Raonic, the 6ft 5ins (1.95m) right-hander from Ontario, had never beaten a player ranked inside the world's top eight before but went into his clash with Murray on the back of a straight sets win over sixth seed Nicolas Almagro in the third round.

As he rained down serves approaching 150mph on the Scotsman, Raonic won 94% of first serve points in the first set, as Murray could not earn a single opportunity to break.

Second seed Murray improved in the second set pressurising Raonic in the fourth and sixth games but again the younger player's serve was too strong.

When Raonic broke in the ninth he seemed likely to close out the match, only for Murray to recover and extend the set.

But the Canadian regrouped to stroll through the tie-break, earning the biggest win of his career in one hour and 44 minutes.

In the other half of the draw, world number two Rafael Nadal eased into the semi-finals with a straight sets win over number five seed Janko Tipsarevic.

Nadal broke Tipsarevic's serve at the first opportunity to set the tone for his 32nd consecutive win at the tournament.

Although he was broken in the fourth game of the second set, Nadal rebounded with four successive games to book a semi-final meeting with fellow Spaniard Fernando Verdasco, who advanced after Japan's Kei Nishikori was forced to retire.