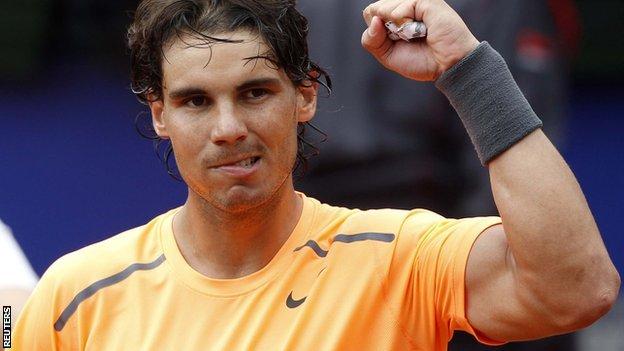 Rafael Nadal swept past Fernando Verdasco 6-0 6-4 to earn a place in the Barcelona Open final.

The six-time champion will face fellow Spaniard David Ferrer on Sunday - the fourth meeting between the two in the final of this event.

"Rafa is the best clay-court player ever," said Ferrer. "He has beaten me three times in the finals here - I hope tomorrow is different."

The statistics are all in Nadal's favour, with the 25-year-old having triumphed in his last 33 matches in this competition, beating Ferrer in the 2008, 2009 and 2011 finals.

But he still expects a close match, saying: "David is always tough. He is a rival you never want to face."

Nadal dominated from the start against Verdasco, running off seven straight points to open the match and breaking his opponent's first service game with a powerful smash.

Verdasco dropped his second service game when his volley fell wide and Nadal kept pressing, not dropping a point in the fourth game as he quickly closed out the first set.

Verdasco showed some fight in the second set and had a chance to break early on, but Nadal won three straight points with strong serves to hold on.

Having saved three break points in the fifth game, Verdasco produced a costly double fault to fall 3-2 behind.

Nadal saw out his service games for a routine victory, meaning he has yet to lose in 13 meetings with his compatriot.

Nadal said: "I began the first set very strong and getting the first break gave me a lot of confidence. He also made some errors early on which helped me."

Ferrer found life more difficult against 21-year-old Raonic, who again produced the same massive serve that saw off Andy Murray in straight sets in the quarter-finals.

The Canadian hit 15 aces but third-seeded Ferrer worked him around the court with well-placed ground strokes and ultimately proved the better finisher in the two tie-breakers, despite being 3-1 behind at one stage in the second.

"It was very difficult to beat him," said Ferrer. "We both had our chances. It was a question of winning or losing the key points."