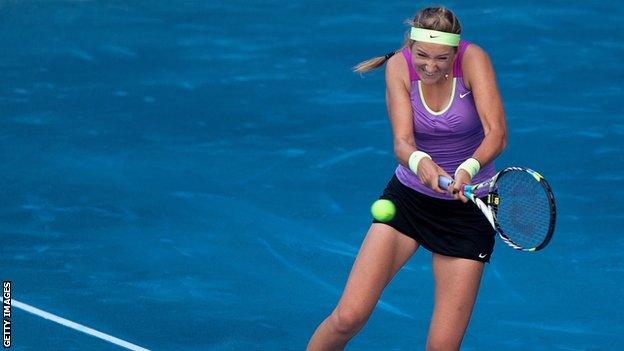 Top seeds Victoria Azarenka and Maria Sharapova are both through to the second round of the Madrid Open.

The world number one and last year's runner up Azarenka beat Svetlana Kuznetsova 7-6 6-4.

Former world number one Caroline Wozniacki also made it through, but only after being pushed all the way by Ksenia Pervak. She eventually prevailed 7-6 (9-7) 3-6 6-4.

Of the other players fancied to do well on the new blue clay surface, the 2010 French Open champion Francesca Schiavone crashed out 6-4 6-7 (8-10) 6-3 to American qualifier Varvara Lepchenko.

The courts have been attracting almost as much attention as the players.

Speaking before the tournament Wozniacki said: "Blue is my favourite colour, this makes things a bit different.

"The court seems a bit faster than when it was (traditional) red.

"Adding the Madrid altitude (650 metres above sea level) makes it even faster. But we will only know who handled it best when the tournament is over."

Defending champion Petra Kvitova added: "I haven't practised on them enough yet to say, but I think they are something new for us."In my opinion they look very nice, very cool.

"I like the colour, so I'm looking forward to playing on them."

Both Venus and Serena Williams are in action on Monday with ninth-seed Serena taking on Russia's Elena Vesnina while Venus, who is on a wildcard, takes on Angelique Kerber of Germany in the second round.