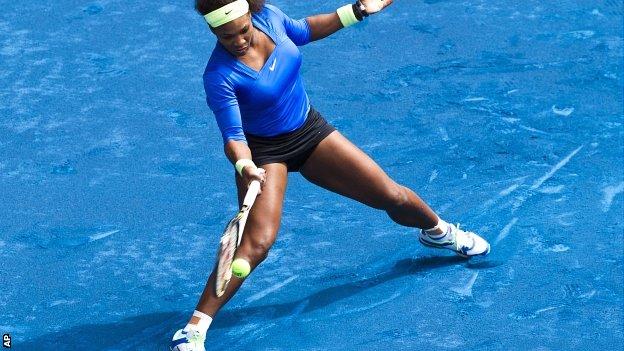 Serena Williams marked her first European appearance of the season with a comfortable 6-3 6-1 victory over Elena Vesnina in the Madrid Open.

However, her older sister Venus Williams lost 6-4 6-1 to Angelique Kerber in the first round.

Serena, seeded ninth, coasted into round two and served impressively, with 14 aces.

"I was feeling good," she said. "It's my first tournament in Europe this year and I hope I can keep up the form."

Serena, who reached the third round the last time she played in Madrid in 2010, struck 40 winners past her Russian opponent, who was last week's Budapest Grand Prix runner-up, and is unbeaten in eight matches on clay this season as she builds towards the French Open, which starts on 27 May.

It was an impressive performance and, speaking about the new-look blue clay courts, the 30-year-old added: "I haven't noticed, I think it's the same, you just don't get as dirty."

Venus's third tournament since being sidelined by illness was ended after being broken six times by the 12th-seeded German.

Fifth-seeded Samantha Stosur rallied to beat Christina McHale 2-6, 6-4, 6-0 to reach the third round, as did French Open champion Li Na after winning 6-3, 6-1 against Silvia Soler-Espinosa.