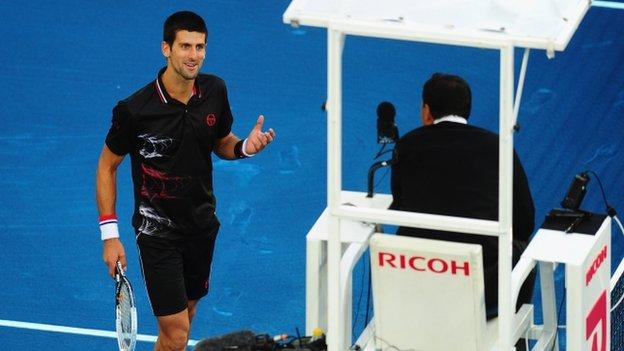 Novak Djokovic described the Madrid Open's blue clay courts as "impossible" after beating Daniel Gimeno-Traver 6-2 2-6 6-3 in the first round.

"To me that's not tennis. Either I come out with football shoes or I invite Chuck Norris to advise me how to play on this court," said the Serb.

Djokovic had lost his only previous clay-court encounter with Gimeno-Traver in 2006 and rarely looked 136 ranking places better than his opponent.

He stuttered badly in the second set, suffering consecutive breaks of serve, before reasserting control in the decider.

"I hit five balls throughout the whole match. With everything else, I was just trying to keep the ball in the court," he added.

"When you slide on the red clay you have a feeling you can stop and recover from that step. But here, whatever you do, you are always slipping.

Azarenka, who has won four titles already this year, also looked short of her usual fluency as she overcame the Czech Republic's Andrea Hlavackova 6-3 7-6 (7-2) to make the third round of the women's draw.

"I felt like a lost a little bit of my concentration," said Azarenka.

"I'm glad I could stay in control and finish the match. There is more room to improve."

Nadal will make his debut on the event's new surface on Wednesday against Nikolay Davydenko.