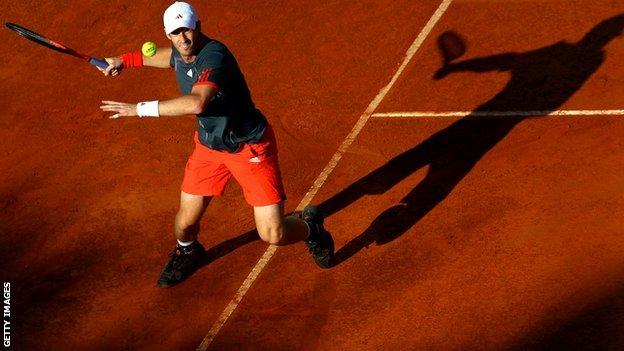 World number four Andy Murray overcame David Nalbandian 6-1 4-6 7-5 to make it into the third round of the Italian Open in Rome.

Murray, 25, cruised through the first set, but found his Argentine opponent a much harder proposition in the second.

Nalbandian forced the match into a third with a much-improved service game, but Murray saw out the match.

The clay event in Rome is seen as a curtain-raiser for the French Open, which starts in 12 days.

After his win over David Nalbandian on Centre Court in Rome, Murray was presented with a cake and candles to celebrate his 25th birthday.

Birthday boy Murray did not compete in the Madrid Masters last week having sustained a back injury, and had also received a bye through the first round in Rome.

He seemed in total control of the match in the first set, seizing the initiative after dominating Nalbandian's unreliable first serve.

After a marathon 15-minute sixth game ended with Nalbandian's 17th unforced error, Murray was able to close out the set.

But the experienced Argentine's performance took an abrupt about-turn in the second set, as the 30-year-old clay court specialist broke his higher-ranked opponent then capitalised.

Murray's first serve deserted him, landing a poor 42% and allowing his opponent to take the game into a deciding third.

The final set was a tight and hard-fought affair, with both players breaking the other's serve before Murray forced three break points at 5-5.

Nalbandian saved the first two before a Murray return clipped the net cord and dropped over, giving the Scot the game and allowing him to serve for the match.

He had to save two break points of his own in the final game, but was able to close out the match in the gathering dusk.

Murray's victory sets up a third round clash with with either Richard Gasquet, who defeated Roger Federer in this event last year, or home favourite Paolo Lorenzi.

Elsewhere, world number one Novak Djokovic dominated Australian teenager Bernard Tomic to produce an impressive start to the defence of his title with a 6-3 6-3 win.