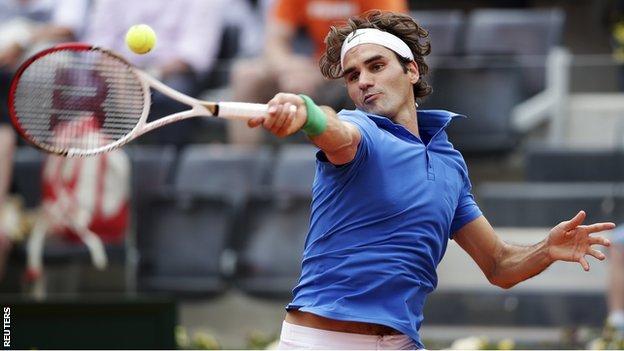 Third seed Roger Federer overcame physical aches and pains to beat Carlos Berlocq 6-3 6-4 to reach the third round of the Italian Open.

Top women's seed Victoria Azarenka, of Belarus, beat Israeli Shahar Peer 6-1 6-2 but then withdrew from the tournament with a shoulder injury.

I need to make sure I make good decisions, so I go round-by-round

Their third-round match is third up on the Suppertennis Arena court, with the first match at 10:00 BST.

Azarenka's withdrawal, with 10 days to go until the French Open, came as a surprise as she had shown no signs of the injury during her win over Peer. This tournament is the last major warm-up for the French Open.

The Belarussian's decision to withdraw means her scheduled opponent, Dominika Cibulkova of Slovakia, advances to the quarter-finals.

Federer, winner of the Madrid Masters last weekend, only decided to play after completing his practice session on Wednesday morning.

After setting up a clash with Juan Carlos Ferrero, the Swiss said: "I wanted to see how I felt and make sure that I didn't have anything major because we're ahead of a long summer.

"If this was the last tournament of the season it would be no problem. But as this is the beginning of many tournaments in a row, potentially a lot of five-setters in a row, I need to make sure I make good decisions, so I go round-by-round.

"I'm happy that I felt OK out there today."

But big seeds Agnieszka Radwanska and Caroline Wozniacki both lost.

Serena Williams appeared to struggle with her back at times.

"Everyone has aches and pains here and there and today I felt it a lot because I have been playing a lot and practising even more," she said. "Hopefully I'll be better by tomorrow."