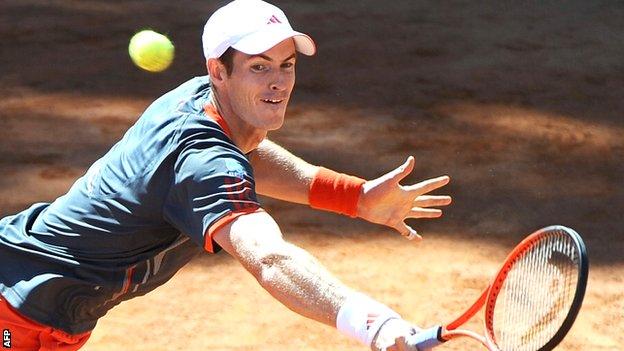 Andy Murray's preparations for the French Open suffered a setback as he was beaten by 16th seed Richard Gasquet in the third round of the Italian Open.

The Scot edged an 83-minute first set but Frenchman Gasquet rallied to win 6-7 (2-7) 6-3 6-2 in just under three hours on Rome's SuperTennis Arena.

Murray, 25, later revealed he has been carrying a back problem since December but declined to elaborate.

The season's second Grand Slam starts at Roland Garros on 27 May.

"I don't really want to go into detail of what it is and what treatment I've had done, but I've had it a while, since December," said world number four Murray, who pulled out of the Madrid Open with the problem.

"But hopefully by the time the French Open comes around I'll be in peak condition. That's the goal."

Gasquet goes on to face David Ferrer in the quarter-finals after the Spaniard beat French 11th seed Gilles Simon 6-0 7-6 (7-5).

"It was difficult to play in the wind, but it was the same for both of us," said defending champion Djokovic, who next plays Jo-Wilfried Tsonga or Juan Martin del Potro.

"He was able to deal with the conditions better at the start, but after a set-and-a-half I started to play better and change my strategy.

"I never expected an easy match against him on his favourite surface. I felt I started hitting the ball better. I found my rhythm."

"I'm getting nervous," said Serena, looking ahead to the French Open. "I feel good and I've had a lot of practice on clay.

"Today I was running so much, I was ready to play and feeling good. I wasn't tired at all."

The result puts Venus on course for a place in the US Olympic team, a remarkable achievement after she was diagnosed with the debilitating Sjogren's Disease during the 2011 US Open.