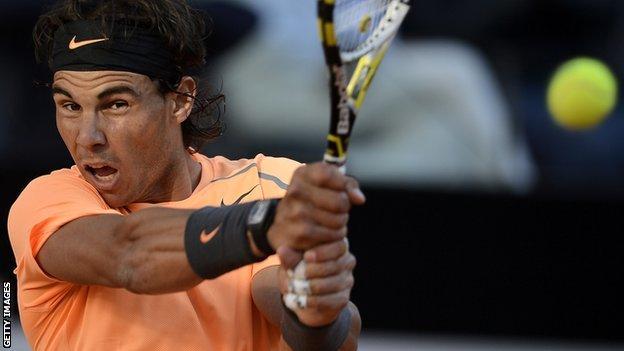 Novak Djokovic will meet Roger Federer in the semi-finals of the Italian Open.

In the other last-four clash, Rafael Nadal - who overcame Tomas Berdych - will take on David Ferrer after his fellow Spaniard beat Richard Gasquet.

In the women's tournament, Serena Williams will play Li Na while Angelique Kerber will come up against Maria Sharapova.

Nadal, ranked third in the world, continued his quest for a sixth title at the clay-court event with a 6-4 7-5 victory.

In the other semi, Djokovic - who beat Frenchman Tsonga 7-5 6-1 - will meet Roger Federerfor the 25th time.

World number one Djokovic, the defending champion, struggled with his serve in the opening set but eventually found his range to eliminate the fifth seed.

Like Djokovic, Nadal was eliminated at the quarter-final stage on the experimental blue clay in Madrid last week, to slip behind Federer in the rankings.

But he broke Madrid runner-up Berdych in the first game of the match, then recovered a break midway through the second before pulling ahead for good.

Federer easily brushed Italian Seppi aside, taking only 54 minutes to wrap up a 6-1 6-2 victory.

In the women's draw, Serena, who triumphed in Madrid, reached the semi-finals after her opponent Flavia Pennetta retired with a wrist injury while 4-0 down in the opening set.

"No-one wants to win like that, but I'm happy to get half a day off," said Williams.

"I've been playing a lot of days in a row. I even practised on Sunday. It's a shame it had to end because I was really getting into the match."

The American will play French Open champion Li Na in the last four, after the Chinese eliminated Dominika Cibulkova 6-1 7-6 (7-4).